Snow (スノー, Sunō?) is a Japanese adult visual novel developed by Studio Mebius for the PC first released on January 31, 2003. It was later ported to the Dreamcast in September 2003,[1] and the PlayStation 2 in February 2004 with adult content removed for both ports.[2] While the original PC version has no voice, in September 2004 a new full voice version for PC, Snow: Full Voice Version,[3] was released followed by another "renewal" PC version, Snow P.E in September 2006;[4] P.E standing for Plus Edition, which backports added parts from the console versions. A port for the PSP titled Snow-Portable- was released by the company Prototype in August 2007.[5][6]

The game features more than six-hundred different stills with simple animations and effects[citation needed], a multiple-choice-based conversation system, beautiful Japanese settings and a long storyline. A manga called Snow: Pure White was published by Kadokawa Shoten, one volume has been issued. DNA Media Comics have published two comic anthologies for Snow. Light novels and drama CDs based on the visual novel have also been produced.

All of the voice actors given are from console versions (DC, PS2 and PSP).

Shigure Kitazato (北里 しぐれ, Shigure Kitazato?)
Haruna Ikezawa
A mysterious girl Kanata encountered in the hill near the village. She is extremely silent and seems to have fear of talking with others.

Seishirō Tachibana (橘 誠史郎, Seishirō?)
Yasunori Matsumoto
Physician of the village and father of Meiko. He keeps a love relationship with Tsugumi.

Mysterious girl (謎の少女, Nazo no shōjo?)
Ryōko Ono (PSP)
A character who firstly appeared in P.E., she looks as same as Shigure and holds lots of secrets. Ōka is her closely friend.

Snow is the fourth visual novel to be developed by Studio Mebius, after previous title such as X -Ekkusu-, Akumu, and Zetsubou. The game was first released on January 31, 2003 as a DVD and a CD, 18 prohibited. Snow was made available to play as an all ages version on Dreamcast by NEC Interchannel on September 25, 2003, and NEC Interchannel also provided a PlayStation 2 version on February 26, 2004. A full voice version for the game was released on September 24, 2004. Snow - Plus Edition was released on September 29, 2004, it is abbreviated as P.E. The P.E edition backports added parts from the console versions. The game was ported to PlayStation Portable on August 16, 2006, the PSP version was produced by Prototype. 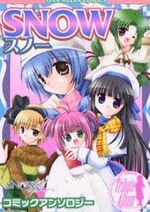 Snow was the second most widely sold game of 2003 on Getchu.com, a major redistributor of visual novel and domestic anime products.[10] In the October 2007 issue of Dengeki G's Magazine, poll results for the 50 best bishōjo games were released. Snow ranked No. 26 out of 249 titles, with 11 votes.[11]