Snubbull(ブルー, Burū, Bulu in original Japanese language versions) is a fictional character of the Pokémon franchise.

The name Snubbull probably originates from the words snub and bulldog.

Early promotional material listed Snubbull's name incorrectly (such as the captions on the Pokémon: The First Movie), spelling it "Snubble". This error continued until the release of Gold and Silver on American shores.

Snubbull's appearance is distinctively canine, and it resembles most the Bulldog breed. It is bipedal, and its fur is styled in the impression of a dress. Its fur is mostly pink, but it has a light blue ruff around its neck and oval marks of the same color around its waist. Snubbull has prominent canine teeth.

Despite its rather intimidating appearance, Snubbull has a playful and affectionate personality, similar to the real-life bulldog, which makes it a popular pet among the women of the Pokémon world. Another of Snubbull's personality traits is its cowardice, which it tries to hide behind a gruff exterior.

If it feels threatened, Snubbull can bare its fangs and make its appearance intentionally intimidating to terrorize smaller and/or weaker Pokémon into running away. However, Snubbull has also been observed to be a little sad at driving away potential friends like this. Snubbull's cowardice combined with its frightening appearance explains why Snubbull in the games can have either the Intimidate or the Run Away ability, which seem the exact opposite of each other at first glance.

Snubbull's Attack stat is very high for a Basic Pokémon that can further evolve, but the rest of its stats are average at best, and its Speed is decidedly low. Snubbull learns many powerful disruptive moves, such as Scary Face, Tail Whip and Charm, all of which lower the opponent's attributes. Because of its low defenses, Snubbull move-sets tend to have at least one of these moves, rounding off the list with a powerful Normal-type attack or two. Generally, however, Granbull, Snubbull's evolved form, is used in its place.

Snubbull is also noteworthy in that it is one of the few Pokémon which may learn the Heal Bell skill.

The first Snubbull of the anime is in the Pikachu's Vacation short movie, which accompanied Pokémon: The First Movie in cinemas as a supporting feature. A Snubbull (albeit spelled "Snubble") is the apparent leader of Cubone, Marill, and Raichu, three bullying Pokémon that visit the Pokémon Camp and cause trouble for Ash's Pikachu and its friends.

The next was a female which, in episode #126 (Snubbull Snobbery) escaped its rich owner and the pampered lifestyle she offered it. It ended up falling in love with Team Rocket's Meowth and his tail in particular. It followed Team Rocket around for a number of episodes so it could chomp down on Meowth's tail and even became a temporary Pokémon for Jessie at one point. Its trainer caught up with it in episode #177 (The Trouble With Snubbull), where it evolved into Granbull. Since its master had grown much hardier from searching for it all over the world, Granbull accepted her offer to return home together.

Snubbull is voiced by Rikako Aikawa in the original Japanese version of the anime.

Blue first traded her Snubbull with Silver's Horsea before but then they traded them again. Her Snubbull evolved into Granbull in FRLG Saga. 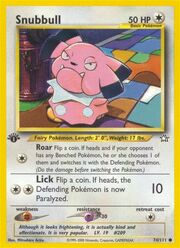 Snubbull is not a particularly prominent figure in the Trading Card Game. It has only made three Basic, colorless appearances: