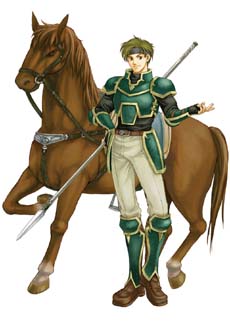 Sain from Fire Emblem: The Blazing Sword, a Social Knight.

A character class from the Fire Emblem series, Social Knights are a basic unit found in every game. Their names vary to Cavalier or Lance Knight depending on the game. They are horse mounted soldiers with snazzy armor that looks cool but does not protect their khaki's, capable of equipping a variety of weapons. They can cover more ground than unmounted units and usually have more HP than the Lords at first. Because of this, coupled with their decent attack, they are the backbone of the early military in Fire Emblem games.

Having two Social Knights early in the game, one red and one green, are a common tradition in the Fire Emblem games. For example, Kent and Sain in Fire Emblem: The Blazing Sword.

Social Knights can be promoted into Paladins, or as recently as Fire Emblem: The Sacred Stones, a Great Knight. Paladins can move significantly more, but Great Knights can wield Axes and have better defense.