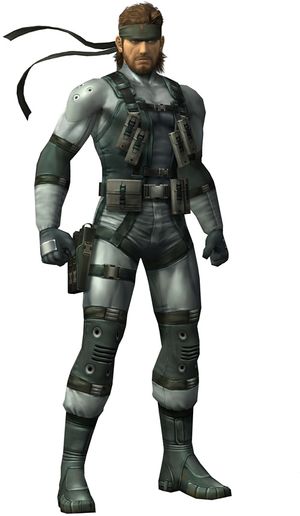 Snake as he appears in 3D in Super Smash Bros. Brawl.

Solid Snake is a main character throughout the Metal Gear series of games. He is a highly trained agent specializing of stealth missions. He likes cigarettes. His real name is Dave, and has a relationship with either Meryl Silverburgh or Otacon. In Metal Gear Solid, he claims that besides Roy Campbell, the only other person he would call a friend is Frank Jaeger, also known as Gray Fox. His voice is done by David Hayter.

He is one of the cloned sons of Big Boss. The other surviving ones being Liquid Snake and Solidus Snake.

Much as Metal Gear began as a pastiche of action movies of the time, Solid Snake began as a pastiche of contemporary action movie heroes. For example, on the cover artwork of the original Metal Gear, he resembles the Michael Biehn incarnation of Kyle Reese in The Terminator, and the in-game portrait of Snake in Metal Gear 2: Solid Snake resembles Mel Gibson in the game's opening sequence.[1] Solid Snake was even named after another fictional special forces operative: Snake Plissken, Kurt Russell's character in Escape from New York.[2][3] In Guns of the Patriots, Snake is modeled after Lee Van Cleef, who appeared in Escape from New York.[4] His real name, David,[5][6] is a tribute to the film 2001: A Space Odyssey that has a character with the same name.[7] Kojima later described Snake's role in the original Metal Gear as the "player's presence", contrasting the defined personality Solid Snake acquired in Metal Gear Solid.[8] Kojima also noted the influence of anime character Lupin III on the personality of Solid Snake, stating that in "MGS, Snake became this sharp-tongued, Lupin III-like guy who flirted with women and told lots of jokes".[9]

In addition to expanding Solid Snake's backstory, as the first Metal Gear game to feature voice acting, Metal Gear Solid established his characteristic voice and appearance.[10] Yoji Shinkawa's Solid Snake design, characterized by his navy blue bandanna and "sneaking suit", would serve as the template for all future incarnations of Snake in later Metal Gear games. According to Shinkawa, Snake's physique in Metal Gear Solid was based on that of action star Jean-Claude Van Damme, while his facial appearance in the same game was inspired by actor Christopher Walken. Shinkawa described his rendition of Solid Snake from Metal Gear Solid as a "middle ground" between the younger Snake who graced the cover artwork of the first Metal Gear and the middle-aged Snake from the MSX2 version of Metal Gear 2.[3][11] For the initial events from the Big Shell chapter from Metal Gear Solid 2, Snake's visual appearance was sightly modified with his hair being more blonde.[12] Solid Snake became one of the characters easiest to draw by Shinkawa as he notes that his appearance is consistent despite suffering minor changes across the games.[13]