If you are looking for Sonic's first game and not the character, see Sonic the Hedgehog (game)

Sonic The Hedgehog is the star mascot for the Sega Corporation, who replaced earlier failed mascots Alex Kidd and Opa-Opa (of the Fantasy Zone fame). Star of the Sonic series. Sonic the Hedgehog burst onto the gaming scene in 1991 as the system-selling video game Sonic the Hedgehog for the Sega Genesis. He's a blue hedgehog that rolls up into a ball to attack, and is noted for his amazing running speed.

He's associated with other characters of the series like Tails the two-tailed fox, Knuckles, the sharp-knuckled echidna, and about 300 other characters introduced later. Several of them are doppelganger like rival hedgehogs (Though many of his enemies seem to become allies at some point) such as Shadow the Hedgehog, Metal Sonic and more recently, Silver the Hedgehog.

Sonic has an unusual appearance in Rad Mobile, as he appeared as an air freshener. Oddly, Rad Mobile predates the original Sonic the Hedgehog, making the small cameo his first appearance in a video game.

Sonic lives on South Island with his friends, but trouble is created soon, when Dr. Robotnik, known as Eggman in the Japanese versions and later installments, turns the island's animals into Badniks, genetically altered versions of the animals, to capture the Chaos Emerald and create Robotnik Land. Sonic travels through the various zones, battling Dr. Robotnik countless times. Sonic finally defeats him in the Scrap Brain Zone. After Dr. Robotnik is defeated, Sonic returns home to South Island.

After the events of the previous game, Robotnik is shown to have survived and followed Sonic, who was on aboard his plane, the Tornado, to his vacation spot, Westside Island. Spoken of in legend, the people of Westside Island misued the power of the "Seven Stones". Upon arrival, Sonic meets a two-tailed fox named Miles Prower, though Sonic nicknames the fox "Tails" due to his two propeller-like tails. The two become good friends, but trouble starts as Robotnik tries searching for the "Seven Stones", referred to as the Chaos Emeralds, to fuel his most powerful creation, the Death Egg. Robotnik eventually attacks the island, genetically altering the inhabitants into Badniks once again.

Sonic arrives at Never Lake to watch the yearly Little Planet arrive, which is said to appear on the last month of every year. Sonic arrives with a pink hedgehog named Amy Rose, only to find Little Plannet tied to a rock with a chain and covered in metal. Even worse, Amy is kidnapped by a robot that is similar in appearance to Sonic.

Sonic and Tails fly to the island using the Super Sonic powers and the Tornado respectively. Upon land on Floating Island. Knuckles ambushes them and takes the Chaos Emeralds from them. Sonic and Robotnik face another time with the Death Egg ultimately being destroyed.

Once again taking place directly after the previous game, the Death Egg falls from orbit and lands in a volcanic crater. Sonic jumps off the Death Egg and finds himself in a mushroom-land. Sonic plans to destroy the Death Egg once and for all using the powers from the Chaos Emeralds. At a hidden palace, Sonic and Knuckles battle and Sonic emerges victorious. As Knuckles flees, he states that someone is trying to steal the Master Emerald. Sonic follows Knuckles to learn that Dr. Robotnik is attempting to steal it. Knuckles attempts to attack the evil doctor, but he is electrocuted. Robotnik escapes after a battle with Sonic.

Knuckles, realizing Sonic was on his side all along, joins Sonic to stop Dr. Robotnik. They teleport to the Sky Sanctuary, where they see the Death Egg launching back into orbit. Knuckles creates a bridge for Sonic to cross to reach the Death Egg. On the way there, he defeats a weak Metal Sonic in battle. Recovering from time, Sonic rushes onward and faces the evil doctor. After Robotnik's defeat, the Death Egg is completely destroyed, but Robotnik escapes with the Master Emerald. Sonic transforms into Super Sonic and chases after Robotnik.

Sonic defeats the evil doctor, and returns the Master Emerald to the Floating Island, allowing it to be airborne again.

In Sonic Chaos, also known as Sonic & Tails in Japanese localizations and Sonic the Hedgehog Chaos in Europe localizations, Dr. Robotnik is attmpting to use the powers of the seven Chaos Emeralds to build nuclear weapons and lasers.

Robotnik steals the Red Chaos Emerald, causing the other Emeralds to lose balance and be transported to a parallel dimension. Sonic and Tails recollect the Emeralds and stop Robotnik, so South Island does not sink into the sea.

Elsewhere, Nack the Weasel, known as Fang the Sniper in the Japanese localizations, notices Sonic, Tails, and Knuckles distracted and takes advantage by trying to steal the Chaos Emeralds. He does not know the power the Chaos Emeralds have, however, Nack plans to sell them for a high price in the market. This leaves Dr. Robotnik, Sonic and Tails, Knuckles and Nack in four-way race to collect them all.

In one of the mini-games, "Trapped Alive", it is revealed Tails was captured and Dr. Robotnik is attempting to alter Tails into a Badnik.

In Sonic Adventure 2: Battle", Sonic was being apprehended as a criminal suspect. When he jumps out of an airplane, he lands in an unknown city, and must escape. He meets Shadow the Hedgehog, who claims he is the "real" Sonic and summons a robot. After the battle, Sonic becomes a prisoner in jail, until Amy Rose and Miles 'Tails' Prower are able to get him out. After finding out Dr.Eggman's scheme, he has to catch up with the president and explain what is going on. Sonic, after breaking into the pyramid and finding Dr.Eggman's secret base, battles a large Pharoh, and finds out the plans of Dr.Eggman. Once he discovers the plans, he must locate the ARK and stop Dr.Eggman from killing Amy, then have a final duel with Shadow the Hedgehog.

In the game starring Shadow the Hedgehog, Sonic appears in various levels. He appears in the first level (Westopolis) where he is the hero mission company with a mission to defeat all forty enemies, a possible fifth level (Space Colony Ark) where Shadow and Sonic race (Which beating Sonic is the hero mission), and as one of the final bosses, appearing with the Commander in his robot, Diablon.

Like the other characters, Sonic has 4 special moves and a final smash. His Standard "B" move is the Homing Attack, which makes Sonic spin attack the nearest opponent while in midair. Sonic's side special is the Spin Dash, which makes sonic spin through the whole level until he is stopped by a wall or attacked by another character. Sonic's Up special is the Spring Jump, which launches him up in the air pretty far. Aside from being a recovery move, the spring also stays on the stage for a little bit, assisting others as if it was a regular spring item. Sonic's down "B" move is the Spin Charge, which is used to charge the Sping dash. Sonic's final smash is actually a transformation into his ultimate form -- "Super Sonic". By using the powers of the 7 Chaos Emeralds, Sonic is now invincible and floats through the air, knocking enemies all over the place.

Sonic also appears in the Subspace Emissary towards the end.

Sonic is summoned into the book of King Arthur and the Knights of the Round Table, where he meets the Royal Wizard of Camelot, Merlina. She is being hunted down by King Arthur, who has been bewitched with the power of the mighty Excalibur's scabbard. To defeat the evil king, Sonic must partner up with a sacred sword named Caliburn. Once King Arthur is defeated, Sonic will find a way to restore Camelot and become an honorable Knight.

In the long-awaited sequel to the Genesis classics, it is set shortly after the events of Sonic & Knuckles. With the Death Egg destroyed and Angel Island returned to the sky, Sonic takes a break, not knowing that Dr. Eggman had survived the crash and remade some of his best robotic creations. Sonic sets off to explore new areas alone, leaving Knuckles and Tails behind.

In this upcoming Microsoft Kinect-based game, Sonic and the cast will be once again be riding hover boards. 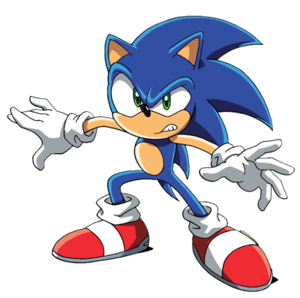 Sonic's origins, however, date farther back than 1991, all the way back to 1990. Back then, Sega was struggling to gain a foothold in the gaming market. After Sega Master System's near world-wide defeat to rival Nintendo's Famicom, Sega fought in the new 16 bit market and faced heavy opposition from the then-massive PC Engine. The PC Engine had already gained a stronghold in Japan, and was racing neck-and-neck against the Genesis in the US. Sega of Japan's president at the time, Hayao Nakayama, decided that the only way Sega could gain a strong portion of the gaming market was with a character that could not only stand up to video game super star Mario, but beat him at his own game. And thus, a massive campaign began to find Sega's Mario killer.

To find the image for Sega's new character, a contest was held internally that allowed employees to submit their own ideas of what the character should be. Failed submissions include a wolf, and Teddy Roosevelt (who would later be reimaged into arch villain Dr. Robotnik), but the design that ended up winning was a small blue hedgehog drawn by Naoto Ohshima. Ohshima claims the idea came from a blending of Mickey Mouse and Felix the cat.

With Sonic's image defined, a dream team of then upcoming Sega programmers and directors was assembled to handle the ambitious project. Included in the project was Hirokazu Yasuhara, Yuji Naka (who had already achieved critical acclaim for his smash hit Phantasy Star), Takayuki Nakamura, Hiroshi Kubota, Jina Ishiwatari, Reiko Kodama, and Naoto Ohshima. In addition, Masato Nakamura, the guitarist for Dreams Come True, an insanely popular Japanese band, was signed on to do exclusive music for the game. Dreams Come True eventually became the lead promoters for Sonic in Japan, displaying flyers for the then-unannounced game on their touring bus with the ad slogan "for a little guy, he sure is tough" sprawled across.

The team that was assembled was charged with the task of transforming Ohshima's character into a super star, and thus, Sonic Team was born. The team decided to tackle the Sonic project from a standpoint that they wouldn't try to beat Mario at his own game, but rather, they'd design Sonic to be everything Mario wasn't. Originally, the idea was to have a normal speed Hedgehog who picked up and threw rings at enemies to defeat them. The team decided that the idea was too Mario like, and shelved it, although it'd later resurface under the name "Ristar" and again in "Sonic Adventure 2."

Yuji Naka came up with the idea of sonic using his sharp quills to damage enemies by rolling into a ball. From there, they expanded the idea to be that of a Pachinko-like game, with Sonic rolling all around. To give the sense of rolling and pinball a greater degree of realism, the team decided to add insane speeds never before attempted in a video game. And thus, the Sonic the Hedgehog we know came to be.

By June 1991, Sonic's ad campaign world-wide was massive as his debut game received the final touches. In Japan, Dreams Come True stepped up its cross-promotion campaign with the release of their "Million Kisses" album - the song "Kusuriyubi no Kesshin" directly inspired the BGM for one of the game's levels - Starlight Zone, and Dreams Come True made this very public. In America, Sega began their massively popular "Genesis Does what Nintendon't" and "Don't Blink!" ad campaigns to announce Sonic's arrival. On June 23, 1991, Sonic the Hedgehog made his world wide debut in America. The game would launch a week later in Europe, and Japan would have to wait till July.