Sony is a Japanese electronics and media distribution company. Founded in 1946, Sony has since become one of the largest conglomerates in the world. Among other things, the own Sony Computer Entertainment, which publishes game titles and creates the consoles we all* know and love. They first entered the video game market in 1994 with the creation of the Sony PlayStation, which would go on to change video game history by taking the #1 position in the fifth-generation consoles. 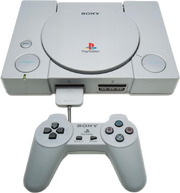 They are also the creator of different media formats, such as Blu-Ray Discs and UMDs, which they have been using in their video game consoles and handhelds.

To commemorate the tenth anniversary of the PlayStation (PS) gaming console in Italy, Sony released an ad depicting a man smiling towards the camera and wearing on his head a crown of thorns with button symbols (Δ, O, X, □). At the bottom, the copy read as "Ten Years of Passion". This outraged the Vatican as well as many local Catholics, prompting comments such as "Sony went too far" and "Vatican excommunicates Sony". After the incident, the campaign was quickly discontinued.

Sony also admitted in late 2005 to hiring graffiti artists to spray paint advertisements for their PlayStation Portable game system in seven major U.S. cities including New York City, Philadelphia, and San Francisco. The mayor of Philadelphia has filed a cease and desist order and may file a criminal complaint. According to Sony, they are paying businesses and building owners for the right to graffiti their walls. As of early January 2006, Sony has no plans to keep or withdraw them.

In July 2006, Sony released a Dutch advertising campaign featuring a white model dressed entirely in white and a black model garbed in black. The first ad featured the white model clutching the face of the black model. The words "White is coming" headlined one of the ads. The ad has been viewed as racist by critics. A Sony spokesperson responded that the ad does not have a racist message, saying that it was only trying to depict the contrast between the black PSP model and the new ceramic white PSP. Other pictures of the ad campaign include the black model overpowering the white model.

In November 2006, a marketing company employed by Sony created a website entitled "All I want for Xmas is a PSP", designed to promote the PSP through viral marketing. The site contained a blog, which was purportedly written by "Charlie", a teenager attempting to get his friend "Jeremy"'s parents to buy him a PSP, providing links to t-shirt iron-ons, Christmas cards, and a "music video" of either Charlie or Jeremy "rapping". However, visitors to the website soon discovered that the website was registered to a marketing company, exposing the site on sites such as YouTube and digg, and Sony was forced to admit the site's true origin in a post on the blog, stating that they would from then on "stick to making cool products" and that they would use the website for "the facts on the PSP". The site has since been taken down. In an interview with next-gen.biz, Sony admitted that the idea was "poorly executed".

On April 29, 2007, at the God of War II launch party, a dead goat was featured as the parties' centerpiece.

In 2002, Sony Computer Entertainment America, marketer of the popular PlayStation game consoles, was sued by Immersion Corp. of San Jose, California which claimed that Sony's PlayStation "Dual Shock" controllers infringed on Immersion's patents. In 2004, a federal jury agreed with Immersion, awarding the company US$82 million in damages. A U.S. district court judge ruled on the matter in March, 2005 and not only agreed with the federal jury's ruling but also added another US$8.7 million in damages. This is likely the reason that the controller for the PlayStation 3 has no rumble feature. Microsoft Corp. was also sued for its Xbox controller, however, unlike Sony, they settled out of court. Washington Post: Pay Judgment Or Game Over, Sony Warned

A California judge ordered Sony to pay Immersion a licensing fee of 1.37 percent per quarter based on the sales of PlayStation units, Dual Shock controllers, and a selection of PlayStation 2 games that use Immersion's technology. MS is currently suing Immersion due to an alleged breach of contract, apparently stating that MS would be entitled to a portion of any cash settlement between Sony and Immersion.