The PlayStation Portable (PSP) is Sony's first handheld gaming system. It was released in North America in 2005 while in Japan, it was released a year before on December 12, 2004. It's release was meant to provide a significant challenge to Nintendo's grasp in the handheld market, which it has dominated since the original Game Boy (and all varying models).

Unlike the Game Boy which used cartridges, the PSP uses UMDs, which are miniature optical discs.

It also features many multimedia capabilities, such as the ability to play MP3s off of its memory card, or play movies released onto UMD disks. Many gamers have created homebrew modifications that allow it to do more than intended, such as run emulators or surf the internet.

The PSP was first announced during E3 2003. It was not until a year later that the system was actually seen. Many considered this announcement to be Nintendo's first real challenge in the handheld market, while Nintendo wrote it off as another doomed competitor compared to the other 9 that have failed since the invention of the Game Boy. Microsoft's reaction to the announcement was one of indifference. They expressed no desire to fight for the handheld market, and were actually pleased that Sony would have to "fight on two fronts." 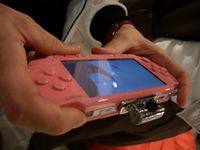 It launched in Japan on December 12, 2004 to huge sell-out success. However, there were reports of problems with the system, which is normal for most system launches, including dead pixels and UMD game disks ejecting out at high speeds during play. It was released in North America on March 24, 2005 at US $250. The first one million units were sold with the movie Spider-Man 2 on UMD. Additionally, PSP systems sold in Canada had an additional game bundled: Gretzky NHL. A shortage of PSPs occurred, though whether it was artificial or not, is up to debate.

The PSP's main competition comes in the form of the Nintendo DS, which features a touch screen and a flip-up design.

Some of the more noteworthy Sony published titles include: