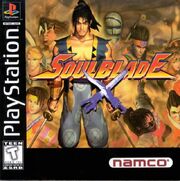 Soul Edge (ソウルエッジ, Sōru Ejji?) is a 1995 3D arcade fighting game developed by the team Project Soul and published by Namco. It is the first installment in the Soul series of weapon-based fighting games. An upgraded and expanded version of the game was ported to the PlayStation later that same year. Namco chose to use the title Soul Blade in Europe, North America and Australia. The game was a commercial and critical success and was followed by a several sequels, beginning with Soulcalibur in 1998.

Soul Edge is the second 3D fighting game to feature characters that fight with weapons (the first being Battle Arena Toshinden), although putting weapons in fighters was not a new concept (Samurai Shodown is a notable example of a 2D fighter with weapons). Apart from the aesthetic benefits, giving the characters weapons allows for a greater diversity between them.

Soul Edge was created prior to the introduction of the so-called 8-Way Run, which allows the player to move their character in a complete range on the Y-axis. The characters can sidestep on either side by double-tapping down to move to the foreground or down then up to the background. The jump maneuver (which in Soulcalibur is more like a hop) moves the player higher into the air, even allowing it to pass above the opponent (much like in Tekken). The game uses an active block system performed by pressing the block button, and a combat system based on the three attack buttons: quick horizontal attack, slow vertical attack, and kick.

Character moves retain a feel of Namco's Tekken series. Each character has in his or her arsenal one or two slow but unblockable attacks. Each character is also capable of performing one or two Critical Edge attacks, consisting of a long series of linked hits, usually ending in a strong high attack. These moves require the input of a special combination of two parts: they are activated by pressing all three attack buttons together, and if it connects, the player has the chance of extending the combo with a character-specific sequence, which must be input during the attack. This attack depletes one-third of the Weapon Gauge when used.

One of the most notable gameplay aspects is the Weapon Gauge. This bar is found under the character's lifebar and is comparable to the equipped weapons' resistance. Each time the player blocked an attack, the bar depletes. If the bar is totally emptied, the character loses his/her weapon and be forced to end the match unarmed; the unarmed move-lists are the same for every character. Another feature that was removed from Soulcalibur's engine is a rock-paper-scissors situation when two character strike at the same time, locking their weapons; those who press the right button have the advantage.

Soul Edge uses an optional offensive block maneuver called the Guard Impact that would allow players to intercept incoming attacks and push them back, resulting in a momentary opportunity for a free counterattack. Opponents, however, are also able to return a Guard Impact after receiving a Guard Impact, allowing for stalemate clashes until one opponent missed the subsequent timing. This gameplay feature would be expanded in future Soul series games.

The game uses the ring out system, which is a forcible maneuver that ejects the opponent from the arena and gains an automatic victory for the round. To achieve a ring out, a character must be knocked outside the ring by an enemy (the player can not accidentally or deliberately get a ring out by hopping out of the ring). The only exception to this rule is Cervantes and SoulEdge, who can get a ring out by themselves upon performing a certain special attack, as long as they're near the edge of the arena.

According to a timeline released by Namco in its Soul Archive site, Soul Edge's events take place in the year 1584. The game tells the tale of warriors searching for the ultimate sword, "Soul Edge". It has been given many names throughout the history, such as "The Sword of Salvation", "The Sword of Heroes" and "The Ultimate Sword" among others. Many strong warriors searched for years, but very few actually found it. The sword, currently in the form of a twin pair of long swords, appeared mysteriously in an auction. It was taken by the dreaded pirate Cervantes de Leon and nothing was known of his fate thereafter. Now, nine warriors from around the world search for the sword for different reasons. Some for power, others for revenge; some believing it's a benevolent sword, searching for its support; while others knowing of its evil nature, seeking its destruction. Nothing is known for certain about the sword, except for one thing: it brings misfortune to those seeking it.

Soul Edge was developed as an experiment by Namco to explore the possibilities of a weapon-based fighting game.[1][2] It was the first motion capture based video game created by using passive optical system markers.[3]

A couple of months later, Namco released a fixed version, labeled Soul Edge Ver. II, upon the complaints of players who found the difficulty quite high and the last boss "unbeatable". Hwang (initially a palette swap of Mitsurugi for the Korean version of the game) was introduced to Japanese players with a new move list, Cervantes became playable, Guard Impacts and Air Combos were implemented, all the characters received upgraded move lists, and new stages were added.[5] The overseas PlayStation version was renamed Soul Blade to avoid potential complications due to EDGE Games's earlier "EDGE" trademark.[6]

On December 20, 1996, Soul Edge was ported to the Sony PlayStation for the Japanese market. A limited special edition came with the Namco Joystick controller. An official tribute book Soul Edge Official Fan Book (ソウルエッジ オフィシャルファンブック／年代記) was published in the Chronicle series by Famitsu on March 31, 1997.[4]

The port kept the Soul Edge Ver. II roster of ten and added five unlockable characters, including SoulEdge, the boss of the game. Other PlayStation-specific features include:

Versions labeled Soul Blade came out in 1997 in the USA and Europe. In the North American version, clothes were added to Sophitia in the opening cutscene where she would have been nude.[7] In the European version, Li Long's pair of nunchaku were changed to a three-section staff due to the BBFC guidelines which were in place at the time banning the depiction of certain weapons such as nunchaku. In the Japanese version, Cervantes (as Inferno/SoulEdge) appears to be laughing at the end of the opening cutscene.

Soul Blade was a bestseller in the UK.[15] Due to its popularity, the game was re-released as part of the PlayStation Greatest Hits, PlayStation Platinum range and PlayStation The Best series.

The game received a universally very positive critical reception, obtaining an aggregated 89/100 score according to Metacritic,[9] including high ratings by IGN ("the best weapons-based fighter on PlayStation"),[12] and GameSpot ("a great fighting game with its share of flaws").[16] Next Generation praised it for "filling in all the blanks with great gameplay, superb characters, unique graphics, and combines them into one solid package."[13] The review by GameFan called it "without a doubt the most stunning graphical fighting feast ever to grace any console."[17] Reviewer for GamePro stated: "Bow down to the new king of fighters, and the first gotta-play-it game of the year."[18]

The PlayStation version's opening sequence won the SIGGRAPH '97 award for the best game video of 1996. It was also included on the list of the ten all-time best game cinematics by Cheat Code Central in 2012.[22]