South Park is a FPS game based on the hit animated satire of the same name. The game let you play as the main characters of South Park (Kenny, Kyle, Stan, Cartman, Wendy, etc.) and had you adventuring through missions that were loosely based on episodes from the early seasons of the TV series. The players had unlimited ammo on the default weapon, snowballs. When you weren't holding a gun, the fire button would throw a snow ball, even if there wasn't any snow around. Weapons and power ups were mostly inspired by the TV series. Cheesy Poofs replenished health, the gun the aliens gave the cow on the first episode was one of the guns, Mr Hanky would dance around you, forming a poop-shield, etc.

Overall, it was the kind of lackluster gameplay you'd expect from a movie or TV show related game. At the end of the game, a safe falls on Kenny's head killing him, and the running gag of "Oh my god, they killed Kenny!" followed by "You bastards!" was butchered, as they actually bleeped out the word 'bastard', in an M-rated game. They were also saving the world from aliens or something. 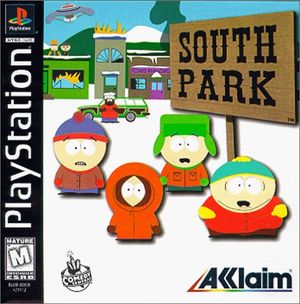