Space Quest I: The Sarien Encounter

From Codex Gamicus
(Redirected from Space Quest I)
Jump to: navigation, search

The original Space Quest game was released in October 1986 and quickly became a hit, selling in excess of 100,000 copies (sales are believed to be around 200,000 to date, not including the many compilations it has been included in). The game was programmed using Sierra's AGI engine and featured a pseudo-3D environment, allowing the character to move in front of and behind background objects. The primary means player input in Space Quest I, as in many other AGI games, was a text parser, with the Amiga and Mac versions offering basic mouse support for movement. The game had a 160x200 resolution displaying 16 colours. Sound cards were not available in 1986, so sound was played through the PC's internal speaker; owners of Tandy 1000 and PCjr computers would hear a three-voice soundtrack.

Space Quest I was eventually remade using Sierra's newer SCI language, which allowed the game to upgrade from its original EGA graphics to VGA. This version was released on August 20, 1991; in addition to the new VGA graphics, which were drawn in 50's B-movie style, it now featured digitized sounds and an icon interface.

Players of the original 1986 version were never told the hero's name, but were instead asked to enter their own. The default name of "Roger Wilco" became the de facto name of the hero in the later games of the series. Roger is a member of the cleaning crew on board the scientific spaceship Arcada, which holds a powerful experimental device called the 'Star Generator' (a thinly-veiled reference to the Genesis Device from Star Trek II: The Wrath of Khan). Roger emerges from an on-duty nap in a broom closet to find the ship has been taken over by the sinister Sariens. He must make his escape, survive a crashlanding on the desert planet Kerona, and ultimately sneak aboard the Sarien starship Deltaur to stop the vicious aliens from using the Star Generator against Roger's home planet of Xenon.

At the end of the game, Roger's efforts are awarded when he receives the Golden Mop as a token of eternal gratitude from the people of Xenon and becomes an instant celebrity. 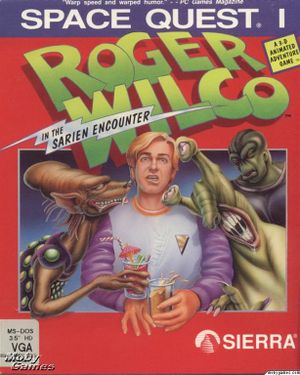 In the game, the player has to buy a droid in a store called "Droid'B'Us", obviously a parody on "Toys'R'Us". In the very first release (Version 1.0X), it was called "Droids'R'Us", before Toys'R'Us sued and Sierra changed the name. Sierra also had legal trouble over a "band" that appeared in the 1991 remake; the band was very obviously modeled after ZZ Top, and even played a somewhat recognizable version of their hit song Sharp Dressed Man.