Spearow is a small bird Pokémon. It eats insects in grassy areas, and has short wings, which means Spearow has to fly fast to stay airborne, and can't fly very far or high. It also uses its wings for flushing out insects from tall grass, and plucks at them with its beak.

In the first episode of the Pokémon anime, it has been suggested that Spearow are colorblind, as one part of the episode is apparently viewed through the eyes of a Spearow, while it's trying to attack Pikachu.

Since it isn't the strongest of Pokémon, it has to fly around ceaselessly, making high-pitched sounds to scare off other wild Pokémon and protect its territory.

Spearow are found frequently in Kanto and Johto, while it is not available in Pokémon Ruby and Sapphire, requiring that you trade from Fire Red and Leaf Green. In Pokémon XD: Gale of Darkness you can snag one from Cipher Peon Ezin in Phenac City.

Spearow is vulnerable to the Electric, Ice and Rock types, strong against Grass and Bug types, isn't affected by Ground type moves, and is not affected by Ghost type Pokémon.

Spearows are mostly used as straight out physical attackers, as they have a decent attack stat and high speed. On the downside, they are weak defensively and can't use the few special attacks they learn (among them Pursuit and Faint Attack) effectively. This changes, though, in the fourth-generation due to the physical/special split. Spearow evolves into its evolved form Fearow at the early level of 20. It can learn Sky Attack, Tri Attack, Quick Attack and Faint Attack as egg moves.

Spearows in the anime have appeared in many different episodes. However, in the very first episode while Ash Ketchum, the protagonist of the plot, attempted to knock out a Pidgey with a rock in order to catch it since his Pikachu was being disobedient, he accidentally slammed the rock onto a Spearow, which later called a whole flock out to peck and drill him to death. Pikachu manages to knock out that Spearow with a Thundershock. But the flock was already out for blood. Ash however manages to survive during a rainy weather; after attempting to sacrifice his body to the aggressive flock to protect Pikachu who shortly sees his dignity and unleashes a powerful Thunder attack. Thus, the entire army of Spearow were ultimately defeated.

The Spearow that Pikachu knocked out makes a reappearance in a later episode in its evolved form, a Fearow. This time, it was commanding a whole bigger flock attempting to exterminate a rival flock of Pidgeys and Pidgeottos but was stopped when Ash's Pidgeot chased it off in fear.

Professor Oak had a Spearow in Pokémon Special. It later evolved into Fearow. 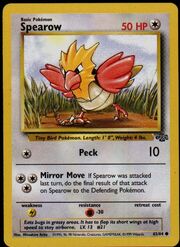 Spearow in the Trading Card Game