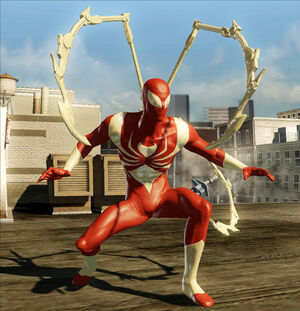 Spider-Man, real name Peter Parker, is a superhero from Marvel Comics. He was bit by an radioactive spider and now has the ability to crawl walls and a spider-sense that warns of him of danger. He can also fire webs from his web-shooters (from his wrists in some versions) that he use for a large variety of purposes, such as to restrain enemies, fire web balls, create a web shield, and move around the city.

While the character of Spider-Man varies across, there are several elements which remain consistent across different incarnations.

The orphaned Peter Parker grew up in Queens, New York, raised by his Uncle Ben and Aunt May following the death of his parents. In his adolescence, Peter grew up to be the stereotypical geek: academically gifted, bespectacled, physically weak, and the target of bullying.

One day, he was bitten by a radioactive spider, which granted him superhuman abilities, including superhuman strength, speed, and a sixth sense allowing him to detect danger. He at first abused these powers, becoming a masked wrestler. One day, he allowed a fleeing criminal to escape, which he would come to bitterly regret: the criminal would kill his Uncle Ben. Resolving to never let such a thing happen again, Peter swore to use his powers for good, and became the vigilante Spider-Man to fight crime in his native New York.

Spider-Man's main love interests are Gwen Stacy (before her untimely death) and Mary Jane Watson, the latter of whom eventually becomes his wife. In his civilian life, he is often seen as an employee of the Daily Bugle, a newspaper company owned by J. Jonah Jameson.

As the result of a radioactive spider bite, Spider-Man has abilities far exceeding the common man. This includes superhuman strength, speed, durability, agility, and the ability to stick to any surface. He uses self-made "web shooters", which fire a web-like substance, which has multiple offensive, defensive, and maneuvering capabilities.

Aside from his powers, Spider-Man is depicted as having a genius-level intellect.

Spider-Man, Captain America, Iron Man, Wolverine, and Hulk are called by Adam Warlock to search for the Infinity Gems around the globe and stop Thanos.

Spider-Man is a playable character. He goes after Paragon, but loses her of sight. He helps civilian escape by protecting the helicopters from the aliens, and then goes to the Daily Bugle. On the roof, he faces an infected Venom and defeats him. Spider-Man is later defeated by Johnny Ohm.

Spider-Man is a playable character available from the beginning. He is one of the heroes that fight against the Masters of Evil led by Doctor Doom. 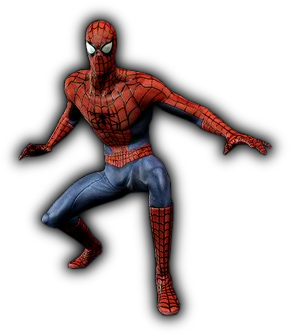 Underground, he, Logan, Iceman, Invisible Woman, and Hulk have to save Ms. Marvel from Shocker. Then they face Grim Reaper. Last they stop Diamondback, Wizard and Scorcher.

In Washington D.C., he, Logan, Iceman, and Invisible Woman go and stop Titanium Man, on the way they met Deadpool.

If Spider-Man joins Captain America he will be wanted too. If he joins Tony he will be a slave.

Spider-Man appears as the main protagonist and playable character, portrayed by Yuri Lowenthal. This incarnation of Peter Parker is a 23-year-old lab assistant at Octavius Industries, having served as Spider-Man for eight years.