Spinarak (イトマル, Itomaru in original Japanese language versions) is a fictional species from the Pokémon franchise.

Spinarak's design is based on the spider. In particular, Spinarak shares coloring and appearance with the "Happy Face Spider," an arachnid from Hawaii that seems to have a face on its abdomen.

It is interesting to note that Spinarak's current Shiny color of dark blue was actually its sprite's default color when it debuted in Pokémon Gold and Silver. Sprites in later games were changed to the current lime green skin color to be consistent with the official artwork of the Pokémon.

It spins a web of fine silk and then waits patiently and with complete motionlessness until prey, such as a bug Pokémon, becomes ensnared in the sticky web. It then waits until nightfall, at which point Spinarak prepares and then devours the prey. The web can be called Spinarak's "second nervous system" because the Pokémon is able to determine the type of prey that has become trapped simply through the vibrations that are created. Many, at first glance, mistake the markings on Spinarak's back as a face. Unlike real-life spiders, Spinarak have only six legs, with two poisonous fangs that kill prey and a venomous barb on its head, similar to Weedle's.

In the third generation games, wild Spinarak can be found in FireRed and LeafGreen in Pattern Bush on Six Island; however, Spinarak are much more common in FireRed. It can also be caught in Emerald's Safari Zone Extension. One is also available in Pokémon XD as a Shadow Pokémon owned by a typical Cipher Peon.

In Pokémon anime episode 123, Spinarak Attack, Ash Ketchum's party visits a city in which the police force uses Spinarak to aid them in their work instead of the traditional Growlithe that most police in the Pokémon universe use.

Spinarak has many other small appearances in various episodes, usually alongside other Bug Pokémon. Misty has a phobia for bug-like Pokémon, and is therefore naturally afraid of Pokémon such as Spinarak, Caterpie, and Kakuna, among others, though in one episode, it is revealed that she considers Ledyba to be cute.

During the Gold, Silver and Crystal saga, one of Team Rocket's elite operatives owns a Spinarak, which uses its webs extensively to trap its targets. 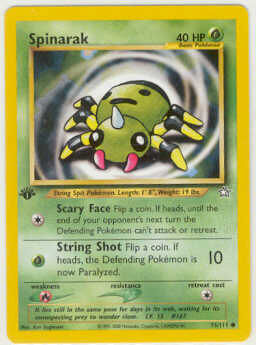 Spinarak has made several appearances as a basic grass type pokémon in the following expansions: