Squirtle is one of the original 150 Pokémon that first appeared in Pokemon Red and Blue. It is more well-known due to being one of the first three starting Pokémon of the first Pokémon game. Shortly after birth, their backs swell and harden to make them more resilient towards attacks; most objects will bounce right off a Squirtle’s shell when force is applied. The shell’s rounded shape and the grooves on its surface also allow Squirtle to swim at high speeds with minimal resistance. When feeling threatened, Squirtle withdraw their limbs and their long necks into their shells and spray water from their mouth with great force, either to attack their opponent or merely to intimidate it. This ability is also used to stun prey while hunting.

Choosing Squirtle is a somewhat more "neutral" choice in comparison to Charmander and Bulbasaur. Squirtle will give you an advantage over the first Gym Leader, Brock, and his Rock-type Pokémon, can match up with Misty's water types, but are weakened by Lt. Surge and Erica's Electric and Plant types. Squirtle will come in handy in the last two gyms, where Fire and Ground Types are abundant.

Also of note is that Squirtle remains a simple Water type throughout its evolutionary chain up through Blastoise, never gaining the strengths and weaknesses associated with double-types, as seen in Charizard and Venusaur. Additionally, the type advantage of the rival's Pokemon choice if you choose Squirtle (he will choose Bulbasaur) can be circumvented by teaching Wartortle or Blastoise and ice attack, like Ice Beam or Blizzard, which is super effective against Grass types.

In the original titles (Pokémon Red/Blue) as well as their remakes, (FireRed/LeafGreen), Squirtle is the Water-type Starter Pokémon offered to the player at the beginning of their adventure, along with Charmander, the Fire-type choice, and Bulbasaur, the grass-type choice. In the next game, Pokémon Yellow, Bulbasaur, Charmander and Squirtle are not available from the start, as all three have already been taken by other trainers; instead, the player starts with a Pikachu. Squirtle becomes available later in the game, as a gift from an NPC (an Officer Jenny in Vermilion City after beating the Gym Leader, Lt. Surge). This progression is much closer to the storyline of the anime. Squirtle is one of the sixteen characters you can start with in Mystery Dungeon.To be him you have to score jolly in the personality test if a boy, and relaxed if a girl.

For some time, Ash Ketchum had a Squirtle on his team. Previously abandoned by another trainer, it had joined up with four other Squirtle to form a criminal gang called the Squirtle Squad (Zenigame-gundan), breaking with the “cute” image pervading the popular perception of this Pokémon. However, the Squirtle Squad were mostly harmless, playing pranks rather than actually harming people. When the Squirtle Squad wound up saving a nearby town from a forest fire (after a vain attempt from Meowth to make them turn to evil by claiming that Team Rocket and Ash were his “pets”), the Squirtle Squad became the firefighting Pokémon of the town – without their leader, however, as it had decided to go with Ash. Squirtle accompanied Ash for much of his journey through Kanto, the Orange Islands, and parts of Johto before rejoining the Squirtle Squad, whose confidence and firefighting prowess had greatly diminished without a leader. As its trainer loyalties lie clearly with Ash, it returned to battle at Ash’s side briefly in the Johto League Silver Conference, accompanied by Officer Jenny.

Ash’s Squirtle has a “tough guy” personality, and sometimes wears a pair of dark glasses (particularly in its capacity as the Squirtle Squad’s leader) which at other times are apparently hidden inside its shell. Squirtle is often characterised as a “act first and think later” character (contrasting with its friends Pikachu and Bulbasaur). Its Water Gun attack is quick and precise, often hitting the same place on a target with consecutive attacks, even if it is upside-down in mid-air. Its Skull Bash attack turns its whole body into a projectile, and is used as a convenient means of escape should it wind up inverted. Squirtle’s best friend is Ash’s Bulbasaur. Bulbasaur was the most reluctant to say goodbye to Squirtle when it left to rejoin the Squirtle Squad, but even as they followed their separate paths their friendship never died.

Various Squirtle have been seen in Professor Oak’s lab. Recently, a small baby individual took a particular shine to May, and it joined her team when she and Ash went to the Battle Frontier.

Ash's Squirtle returned in the episode "Gathering the Gang of Four", where it met May's Squirtle, and was able to defeat Brandon's Ninjask, but lost to his Solrock.

Although it was only shown once in a flashback "Challenge Of The Samurai!", Gary Oak also started out with a Squirtle, which, ironically, was the Pokémon that Ash had first decided to pick.

On one episode of the Kanto region, a Blastoise was made to fall asleep by a Jigglypuff. This Blastoise was a leader of many Wartortle and Squirtle.

Another Squirtle is the protagonist of the half-hour animated special, "Pokémon Mystery Dungeon: Team Go-Getters Out Of The Gate!". Not technically a Pokémon, this Squirtle is originally a human who, for unknown reasons, has been turned into a Pokémon. He is found by a Charmander and made part of the Pokémon Rescue team, Team Go-Getters. Despite his lack of knowledge about being a Pokémon, Squirtle is more than happy to be part of the team. At first, his attempts to use the Water Gun attack resulted in the much weaker Bubble attack; eventually, however, he is able to use the Water Gun successfully to defeat a vicious Skarmory. This Squirtle is naive and inexperienced, but he is also quite kind and will do what he needs to in order to protect his friends.

Squirtle is voiced by Rikako Aikawa in the original Japanese version, and Eric Stuart in the English version.

Squirtle and his evolutions specifically have moves and behavior in the anime that is directly linked to the movie monster Gamera. Their Rapid Spin technique is identical to Gamera's as they pull into their shell and fly, spinning like a flying saucer, through the air.

Green, called Blue in the original Japanese edition, the original female protagonist in the Pokémon Adventures, (a manga series based on the original games) stole a Squirtle from Professor Oak's laboratory. It was not seen until Chapter 15, "Wartortle Wars", by which point it had evolved into a Wartortle, nicknamed Turtley, which she used to try and escape from another trainer, Red, chasing her.

Green then joined with Red, who received a Bulbasaur from Professor Oak, and Blue, who received a Charmander, to defeat the Team Rocket strong hold of Saffron City, using Turtley to defeat Sabrina's Kadabra in Chapter 32, "A Little Kadabra’ll do it", and to destroy Team Rocket's Zapmolcuno (a merged form of Zapdos, Moltres and Articuno) in Chapter 33, "The Winged Legends", destroying their control on Saffron City, splitting the three birds in the process.

Turtley then was used by Green in Chapter 39, "Just a Spearow Carrier", in the ninth Pokémon League semi-final, against "Doctor O", a pseudonym of Professor Oak. Doctor O originally battled Green's Jigglypuff, using Agility to escape its Sing attack. As Spearow flies high into the air, Professor Oak releases a Dodrio and a Pidgeot, remembering that Green has a fear of birds, being kidnapped by one at a young age. Green knows that despite not having any Flying-type Pokémon, she can still battle in the air. She releases Turtley, ordering it to use Hydro Pump, launching itself into the air. Doctor O commands Spearow to use Mirror Move, knocking out Turtley and winning the match.

In the Pokémon: Pikachu Shocks Back manga, which loosely parallel the storyline of the anime, when Pikachu is separated from Ash temporarily it meets a cynical Squirtle, who believes Ash has abandoned Pikachu. Together they travel (with a Bulbasaur and a Charmander) to a secret Pokémon village in the mountains. Later, Ash has caught a Squirtle of his own, which he uses to battle Team Rocket. It accompanies Ash thought his journeys in the Orange Islands, and is instrumental in defeating Rudy. Squirtle eventually fights on Ash’s team in the final showdown with Drake, the Orange Crew Supreme Gymleader, but it is dispatched by Drake’s Dragonite.

In Magical Pokémon Journey, a male Squirtle befriends Almond and seems to regard him as a brother. 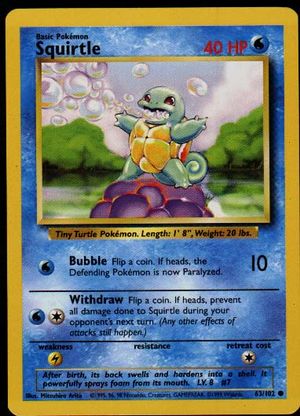 In this capacity, Squirtle was among the first Pokémon cards with which players became acquainted. Most Squirtle cards are typical, Basic Pokémon cards, and are primarily used to play stronger cards (such as Stage-1 Pokémon, like Raichu, or Stage-2 Pokémon, like Charizard). Squirtle cards have appeared in the Base Set (and Base Set 2 and Legendary Collection), Team Rocket, Expedition (2 cards), Team Magma vs. Team Aqua, EX FireRed & LeafGreen (2 cards) sets. Many Squirtle cards employ chance, in the form of coin flipping, to paralyze the opponent, a special condition that forces the Defending Pokémon to not attack or retreat for one turn.