StarTopia is a computer game from Mucky Foot Productions (formed by ex-Bullfrog employees) and published by Eidos in 2001, in which the player administrates various space stations with the task of developing them into popular hubs. The game has a comical overtone, with lighthearted humor and cartoonish aliens.

The player is tasked with developing a series of space stations according to the wishes of various employers. The game is set after an apocalyptic galactic war, and many of the stations are in a state of considerable disrepair. It is hinted that these space stations are essentially the last few space-based environments available to the denizens of StarTopia, as most of them had been destroyed during the war.

The player has no direct control over the aliens that wander about the station. Instead, it is the player's job to construct rooms and hire aliens to staff them. The rooms provide basic necessities as well as recreation, encouraging visitors to remain on the station and continue spending money. Each type of alien is suited to a particular kind of task, and individual aliens have a set of statistics that determine their value as an employee. The actual goal for the player varies from one scenario to the next; in some scenarios, the player is expected to meet an economic goal, while in other scenarios the player is required to perform a specific task such as converting a certain number of aliens, or taking over the entire station by force. 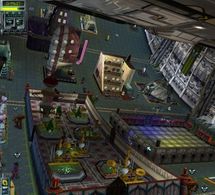 A screenshot of the Recreational Deck with buildings such as a Disco, Motels, Bars, Holodome and Shops

Each station contains three decks, or levels, though some of the early missions only make use of one or two decks. The engineering deck is the "main" deck where most of the station's facilities are built. It is also where visitors and trade ships enter or exit the station. The pleasure deck is mainly for recreation and is the economic center of the station. This is where aliens go to spend most of their money, provided that there are shops to spend it in, and it is also important for maintaining happiness. 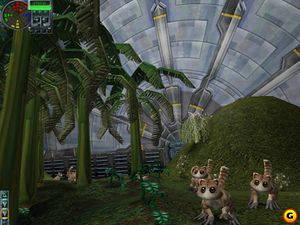 The biodeck, which is similar to an artificial biosphere, has a terrestrial floor and a transparent dome. The player can adjust the environmental parameters of the deck, including terrain height, water level, moisture, and temperature. These parameters can be adjusted locally, such that a single biodeck segment can contain many different environments. The player can use the biodeck to grow and harvest plants that produce material goods. Plants can also be transplanted into pots and used as decoration elsewhere on the station.

As with most business simulation games, the player builds facilities and hires workers to operate them. Some rooms take care of basic necessities such as food, sanitation, and health care, while others provide entertainment or "love" (a euphemism for prostitution). Visitors may be hired by the player to remain on the station and attend to its facilities. Otherwise, they will remain on the station until they run out of money or become unhappy. Visitors can also be forced off the station at the player's discretion, and criminals will be automatically escorted out by security bots if there is no available brig to hold them in. Unhappy employees may also quit and leave the station depending on their loyalty rating. 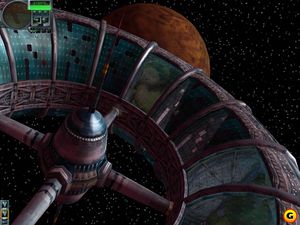 The exterior of a space station with segments visible

In addition to normal visitors, the station can also receive enemy agents. These agents can be disguised as a normal alien or appear as a shady human character sneaking around the station. In either case, the agent will attempt to plant a bomb somewhere on the station and may also attempt to murder other aliens on board. In addition, when caught, the agents will resist and shoot it out with your security forces, causing nearby aliens to panic and flee, disrupting the station's normal operation.

Each space station is subdivided into a number of segments into which the player may expand. These segments are initially isolated by bulkheads, which can be opened for a fee if the segment is vacant. If a rival station manager owns an adjacent segment, the player can take it over through force. Security droids are able to hack bulkhead controls, causing them to open for a short time. During this period, the player can attempt to capture the segment by hacking the new segment's bulkhead control, effectively sealing the segment within the player's territory. However, rivals may take the same takeover action against the player. It is enough to take over a rival's engineering deck to evict him or her. It is possible to achieve an instant eviction by destroying a rival's Energy Collector, but this is extremely difficult to achieve until that rival has been weakened.

As of September 2007, GameTap Gold Subscription members can play Startopia.