Star Control 3 is a video game developed by Legend Entertainment. They were hired by Accolade to create a sequel of Star Control II when the original creators Toys For Bob expressed no interest in creating the sequel with the same budget as Star Control II (which left them working without pay for several months). It was released for DOS and the Macintosh in 1996. 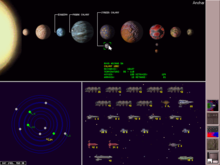 A view of a planetary system in the game after colonization and ship construction.

The game used a 2.5D form of melee combat, but 2D combat was still available. However, unlike SC2, all ship designs absent from the story mode were omitted (with the exception of the Arilou). The module tunes of the second game were replaced with MIDI music, and pixel animations for communication with aliens were replaced with rendered and digitized 2D graphics of live puppets.

The gameplay was a mix of borrowing the melee combat and alien encounter dialogue trees from SC2, with new colony management elements which could be compared to Master of Orion. SC2's resource gathering, and hyperspace travel gameplay elements were omitted.

SC3's story expanded on the mystery of the Precursors' disappearance, and introduced new enemies in the form of the Hegemonic Crux.

In Star Control 3 it is revealed that to protect themselves from the Eternal Ones, a race that inefficiently consumed the energy of all sentient beings once an eon, the Precursors genetically modified themselves to mentally resemble the intelligence of a cow. They created mindless robots (the Daktaklakpak) to reverse the process after the Eternal Ones left. They also left huge caches of their technologies on planets in hopes other races could find how to defeat the Eternal Ones. During the last feeding, their robots malfunctioned, leaving them stranded at that intelligence level for thousands of years. Humans, forever searching for the Precursors but oblivious to their plight, along with many other races found the meat of the Precursors, called by them Ortogs (a 6-legged cow), more delicious than cow, and hence raised, domesticated, and consumed them in massive quantities. The process was able to be temporarily reversed on a single Precursor, giving this knowledge to a captain before it died, instructing him to keep the nature of the Ortogs secret, but to stop their consumption as a food product.