Star Control II: The Ur-Quan Masters is a critically-acclaimed science fiction computer game, the second game in the Star Control trilogy. It was developed by Toys for Bob (Fred Ford and Paul Reiche III) and originally published by Accolade in 1992 for PC; it was later ported to the 3DO with an enhanced multimedia presentation, allowed by the CD technology. The source code of the 3DO port was licensed under the GNU GPL in 2002. The game still enjoys a cult following. 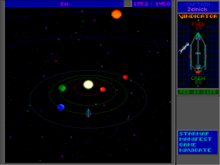 The Captain's ship enters the Sol System at the beginning of the game.

SC2 added a large number of species and ship types to the already diverse cast and replaced the first game's strategy-based scenarios with a story-driven space exploration adventure game that included diplomacy with the inhabitants of the galaxy, some resource gathering sub-sections, and instances of the melee combat of the first game whenever diplomacy failed.

Interaction with the various alien species is a chief part of the adventure game; the backstory of both the species from the first games and new ones were fleshed out considerably. There are literally hours of dialogue, each species bringing out their characteristic conversational quirks, music, and even display fonts. A two-player mode is available, named Super Mêlée, consisting solely of the ship-to-ship combat. All ships from the first game are available, even if they made no appearance in the story, along with a number of new ones.

The plot significantly impacts the game experience by requiring the player to explore every corner of the galaxy and make discoveries and connections independently.

The contents of the soundtrack of the PC version were determined by running a contest which anybody could participate in, composing tracks based on a description of the game. Included on the soundtrack are compositions of Aaron Grier, Erol Otus, Eric E. Berge, Riku Nuottajärvi and Dan Nicholson, the president and founding member of The Kosmic Free Music Foundation. Music is in Protracker-MOD format which uses digitized instrument samples while most of PC game music still relied on FM-synthesis based instruments at the time. The game also supported Gravis Ultrasound sound card, which was popular among MOD composers.

In addition to numerous awards by gaming magazines published around its release, Star Control 2 also has spots in top games compilations of notable gaming publications. IGN named Star Control II the 17th best game of all time, and Gamespot named it one of the greatest games of all time. It also has 8th place in Gamespot's Reader's choice - Ten Best Gameworlds listing,

The game was reviewed in 1993 in Dragon #195 by Hartley, Patricia, and Kirk Lesser in "The Role of Computers" column. The reviewers gave the game five out of five stars.

In the last phase of the war between the Alliance of Free Stars and the Hierarchy of Battle Thralls, the Tobermoon, an Earthling ship, discovered an ancient Precursor subterranean installation in a cave on the surface of an uninhabited planet in the Vela star system. The Alliance hastily sent a secret scientific mission to study the relics, but a massive Hierarchy's offensive forced the Alliance fleets to retreat beyond Vela; the mission commander, Captain Burton, decided to go into hiding on the planet and sent back the Tobermoon, her only starship, asking for help. Though the Ur-Quan forces didn't find the Earthlings during their sweep of the system, relief never arrived. Years later, with the help of a genius child born on the planet, the colonists activated the Precursor machinery and found out that it was programmed to build a starship. Using the limited store of raw materials available in the planet, in ten years the Precursor factory built a (barely) functional ship, which could be piloted only by the now grown genius child, who alone could interact with the Precursor central computer. In the first test flight, it was discovered that the ship Burton had sent for help had been severely damaged by the Ur-Quan and was orbiting unpowered in the outer solar system: the Alliance had never known of the mission's discoveries. The colonists decided to fix the recovered ship, train new crew members for both the Precursor ship and the Tobermoon and send a mission back to Earth, eager to know how the war had ended. Shortly before reaching Sol the little fleet was attacked by an unknown ship; Captain Burton, commanding the Earthling ship, intercepted the alien ship before it could damage the defenseless Precursor starship, but was killed in the short fight, leaving the genius young man in command.

The player begins the game as a commander of the Precursor starship, who returns to Earth to find it enslaved by the Ur-Quan. It is discovered that the rest of the humans' allies in the war against the Ur-Quan have either been eradicated, put under a slave shield, or put into service as Ur-Quan battle thralls. As the player progresses, it is revealed that the Ur-Quan are fighting an internecine war with the Kohr-Ah, a subspecies of Ur-Quan who believes in eradicating all life in the galaxy, as opposed to enslaving it. The winner of this war gains access to Sa-Matra, a Precursor starship with unparalleled power. 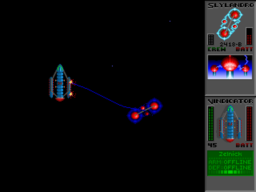 The Ur-Quan Masters (or UQM) project aims to port Star Control II to modern operating systems including Windows, Linux, Mac OS X, and BSD. The project began in 2002 when the original creators Fred Ford and Paul Reiche III released the source code of the 3DO version as open source under the GNU GPL. It is currently at version 0.6.2, and has accomplished its goal. The game media is released under a cc-by-nc-sa license. It has also added the option of online multiplayer Melee play, something which was not available in the original game. A variety of modifications to the melee have been released by fans, including versions with superpowered ships and numerous planets. As of version 0.4, the long-missing intro and ending movies were finally added, as was an in-game setup menu. The ability to mod the game is one of the project's goals.

The project was renamed The Ur-Quan Masters because the trademark Star Control was registered by Accolade in 1997, acquired in 1999 by Atari (then known as Infogrames), along with the rest of Accolade's assets.

While development on the UQM codebase continues, a second group of semi-professional musicians called The Precursors are creating new musical tracks and remixes of the originals. They are an optional package that can be listened to in-game, replacing the original music, or just played with an audio player. The group's main members are Jouni Airaksinen (alias Mark Vera), Tore Aune Fjellstad (alias VOiD), Espen Gätzschmann (alias TiLT) and Riku Nuottajärvi (an original composer for the 1992 release). The Precursors have released three remix packs.

A fully playable port has been produced for the Wii, GP2X portable game system, the Pandora handheld, and the Maemo 5-based N900 smart phone. Other ports are underway to the PlayStation Portable and the Xbox.