Star Fire, released 1979, is considered to be a groundbreaking shoot 'em up arcade game by Exidy that brought a number of new innovations to the market; including being of the first to use a sit-down cockpit.

The look and feel of Star Fire is directly lifted from the movie Star Wars and, to a lesser extent, the TV show Battlestar Galactica. The attract-mode screen displays the name "Star Fire" in the same swooping sans-serif display typeface used by the Star Wars promotional posters and main titles. The primary enemy in the game are spaceships that are visually indistinguishable from TIE fighters. The player's primary weapon is an array of 4 lasers that fire in an "X" pattern, implying that the player is flying a ship somewhat akin to an X-wing. The game was not officially licensed to use the Star Wars trademarks.

The game is brightly colored, in blues, greens, and reds. In 1979, this was still unusual, and made it stand out from many other arcade games of the era. 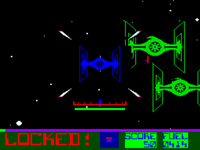 The player controls whether his ship is moving forward or backwards via a lever. A control yoke translates the player's view left, right, up, or down. The controls are loose and somewhat floaty; nimble moves are not possible. The player has a button that fires his quad-linked lasers at a targeting reticle. The lasers travel slowly, taking about 2 seconds to reach their target, and only one shot can be in the air at once. Furthermore, each shot the player fires causes heat to build up in his ship. If the player's rate of fire is too high, his guns will overheat and he will need to wait for them to cool down.

If the player can maneuver such that a TIE fighter-like ship is directly in the targeting reticle, he will "lock on" and any shots fired will automatically hit. When the player successfully shoots an enemy TIE fighter lookalike, the screen prints "GOT HIM". Occasionally, a thinner, horizontally oriented ship that looks like a Viper from Battlestar Galactica will be seen. These have "Exidy" written on their tails, and are worth the largest amount of points. If the player successfully shoots this ship, the screen displays "GOT US". These ships can not be locked onto.

The game is timed. The more quarters the player puts in, the longer he can play. As the player shoots enemy ships, they increase in skill, and also in point value. If the player reaches certain point thresholds, he is given more "fuel" and can thus play longer. The player's ship can be shot; this simply resets the quality of enemies (and thus their point value) down to the lowest level.

Star Fire was the first arcade game to allow a player to enter his or her initials in to the high score table.[1] It was also one of the first games to allow the player to partially damage an enemy with a glancing shot.

Due mostly to the mise-en-scene, the 1983 Atari Star Wars arcade game shares many similarities with Star Fire.

Star Fire can be run (emulated) on a PC by the Multiple Arcade Machine Emulator. It is one of the few games that has legally released for use on the MAME emulator, along with its lesser-known sequel, Star Fire 2.

In 1983 Epyx ported Star Fire and another Exidy game, Fire One!, to the Atari 8-bit family and Commodore 64, and released them in an "Arcade Classics" compilation.[2]

Entering certain sets of initials into the high score table will cause the game to print certain messages: