Star Fox Command is the fifth game in Nintendo's Star Fox series which was published by Nintendo for the Nintendo DS in 2006 and 2007. Released in Japan on August 3, 2006 and in North America on August 28, 2006, it was first announced at the E3 2006 conference, under the name Star Fox DS. Command is the first Star Fox game for a handheld, and supports the Nintendo Wi-Fi Connection, making it the first online Star Fox game. Star Fox Command returns the series to its roots as an air-combat game.

The game's plot involves the protagonist Fox McCloud and his team setting out to defend their homes from aliens known as the Anglar. Q-Games originally worked on a puzzle game that Nintendo decided to turn into a DS game. The game was generally well-received; it has achieved an average score of 76% from Game Rankings, a reviews aggregate.

Star Fox Command has two types of play within the single player game; a strategic map mode, and a battle mode. The overworld-like map mode is where the player takes command of several ships. This mode is used to get ships into the battle mode and is essentially a simple turn-based strategy game. Up to four ships can be maneuvered at a time. The object of this mode is to prevent enemy ships from reaching the Great Fox. This mode also allows players to fire missiles from the Great Fox that they have picked up from exploring in this mode, or from meeting certain conditions in the battle mode (usually destroying all enemies). When a craft that is controlled by the player encounters an enemy group or missile in this mode, the gameplay switches to the battle mode.

Battle mode is similar to the "all-range mode" employed in Star Fox 64 for some bosses and levels. Like the cancelled Star Fox 2 the game is completely all-range, as opposed to the "on-rails" levels featured in most other Star Fox games (however, the game will sometimes force the player to engage in classic "chase" missions in order to complete an objective). The usual objectives are to destroy a base ship, destroy all enemies, or collect a number of cores to complete the battle mode. Once the battle mode is completed, the game returns to the map mode. As players progress through the game, they will be able to choose to go different routes upon completing certain levels. Each route has its own character dialogue to accompany it, and players will be able to visit differing planets depending on what routes they choose. The game features 9 different endings altogether, and gamers can access all of them by playing the game multiple times, selecting different routes each time. Instead of merely giving different perspectives on what happens to the Star Fox team, each ending is unique — the characters go in various directions depending on what ending is watched. Star Fox Command does not feature traditional voice acting. Instead it outputs gibberish akin to the "voices" in Star Fox for the SNES, or the "Lylat speech" present in Lylat Wars (but not Star Fox 64). Players can also record their own voices into the game’s "gibberish generator" using the built-in DS microphone where it is converted into the garbled speech of the various characters.

The planet Venom's forces were all but destroyed, and there is thought to be peace. This is not to be, however, as a race of beings known as the Anglar rise from the acidic oceans of Venom, thought to be unable to support life. The leader of the Anglar plans on destroying the Lylat system, which Fox McCloud and crew set out to save once again. The Star Fox team has broken up, but re-assembles to fight this new threat. Peppy is made the General of the Cornerian Army, replacing Pepper. Fox flew around the Lylat system with ROB on patrol, and Krystal broke off her relationship with Fox after he forced her off the team, because he was afraid she would receive injury and it would affect him. Slippy finds love with a frog named Amanda, and thus spends less time with the team. Falco left the team and went around on solo missions (as he has done before in Star Fox Adventures). There are nine endings depending on paths chosen by the player, though the player is required to finish the game before having the options. Designers have hinted that a possible Star Fox game in the future may begin in the middle of Star Fox Command, revealing a "true" ending. Many fans expect the first ending (Fox getting back together with Krystal and the Starfox team continuing) is the real ending. At the same time, in the same interview, Takaya Imamura stated that "the story ends here", which has thrown some fans for a loop.

The game is hinted at being non-canon, while it has been said that all nine of its endings are. It also features enemies who were presumed dead in Star Fox Assault, such as Andrew Oikonny and Pigma Dengar. 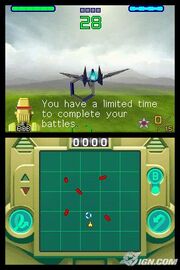 Star Fox Command supports six players in local wireless multiplayer matches via DS Download Play and up to three players on the Nintendo Wi-Fi Connection. In Nintendo Wi-Fi Connection matches, only the Arwing II is available. Players score not by killing opponents, but by collecting stars from them when they have been destroyed. It is also possible to collect a star from an opponent not killed by the player. This is a modified version of the mode from Star Fox 64/Lylat Wars. Nintendo WiFi uses a ranking system based on rankings of the alphabet with Z being the lowest and A being the highest. Players work their way up from Z by collecting wins (it could be based on points). For every win a player gains a certain amount of percent and once they reach 100% they move to the next letter. The highest rank a player can get is 100% of the A rank.