Star Wars Jedi Knight: Jedi Academy is a Star Wars first- and third-person action game released in September 2003. It was developed by Raven Software and published, distributed and marketed by LucasArts in North America and by Activision in the rest of the world.

The game is powered by the same version of id Tech 3 engine used in its predecessor, Star Wars Jedi Knight II: Jedi Outcast, containing Jedi Knight II's modifications to the Quake code to give a third-person view and new lightsaber effects. The player can modify the character's gender and appearance, and can construct a lightsaber by choosing the hilt style and blade color. After completing certain objectives, different saber and combat styles become available.

The player initially chooses the character's species and gender, with certain species being gender specific. Numerous lightsaber hilts with five different colors are available to choose from. As players progress, they will be allowed the option of continuing to use a single saber with all three lightsaber styles, or opting for duel sabers, one in each hand, or a "staff" styled saber with a blade on each end of the hilt, identical to Darth Maul's.

New Force powers in single player include Force Absorb, Force Protect, Force Sense, Force Drain, and Force Rage. As players progress through the game they can choose which force powers to focus on by upgrading between levels.

Instead of moving linearly from one level to the next, the player chooses from a selection of different missions. Several missions are optional and are thusly unnecessary to finish the game. The game also introduces player-controllable vehicles and vehicle-based levels.

The player takes the role of Jaden Korr, a new student arriving at Luke Skywalker's Jedi Academy on Yavin IV. Jaden, along with fellow student Rosh Penin, becomes an apprentice to Kyle Katarn, the main protagonist of the series thus far.

As an apprentice, the player is dispatched on various peace-keeping missions across the galaxy, many of which involve battling the Disciples of Ragnos Sith cult who are stealing Force energy from Force-rich locations across the galaxy. The player learns that the cult is lead by Tavion, the former apprentice of Kyle's nemesis Desann from Jedi Outcast. Seeking revenge against Kyle, Tavion has recovered a Sith artifact—the Scepter Of Ragnos—which has the power to drain and release Force energy. Seeking to restore the Sith and destroy the Jedi, Tavion plans to resurrect the ancient Sith Lord Marka Ragnos by fueling his long dead body with a massive concentration of stolen Force energy.

The story has two different endings, depending on which side of the Force the player chooses. After learning that Rosh has betrayed the Jedi and joined Tavion, the player can choose between killing him (thus turning to the dark side) and letting him live (thus staying on the light side).

If the player follows the dark side, Jaden kills Rosh but refuses to join the Sith or help resurrect Marka Ragnos. Jaden kills Tavion to steal the power of the Scepter of Ragnos and embarks on a campaign of conquest. On the light path, Kyle and Jaden rescue Rosh. Jaden heads to the Tomb of Ragnos to confront Tavion. After besting her in a fight, her body is possessed by Ragnos' ghost. Jaden destroys the Scepter, banishing Ragnos' spirit back into its tomb. 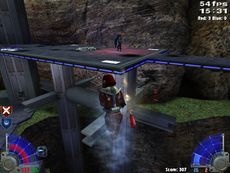 Screenshot from a multi-player game on the PC version where an unknown flag carrier redirects a pursuer's rocket with The Force.

In multiplayer mode, one can play online with hundreds of other players, and choose to play from almost all of the characters from Jedi Knight II and Jedi Academy.

New multi-player modes include Power Duel and Siege. In the former, players join as an individual or as a team of two; players can have more health and Force power in exchange for being at a disadvantage in numbers. In Siege, players assume the role of Scout, Demolitions, Soldier, Heavy Weapons, or Jedi, and use the strengths of their particular role to help their team accomplish the objective. Objectives typically involve breaching a wall or carrying an object from one place to another.

All players can combine elements of the game: force, sabers, guns, into their own unique style of game play. One could, for example, use only a lightsaber and attempt to pull other players' guns from them with the force. A gun wielding player could try to keep their distance from a lightsaber wielding player and protect themselves with Force Absorb/Protect. A force wielding player can, with proper timing and practice, toss lightsaber and gun wielding opponents alike into pits. Others simply choose to focus on one aspect and are thusly vulnerable to other players with varying playing styles. This provides a diverse style balance that is overall effective until some of the hundreds of available mods edit the original game in ways including: saber block, hit sensitivity, etc. Other mods however, do not alter the game as such and they include new gaming environments, player models, and modifications to the game's original weapons and a variety of other features.

Private servers can be manipulated, with mods, to create imbalances mentioned above. Also, a majority of server owners disable guns to make it a more "traditional" Star Wars experience. 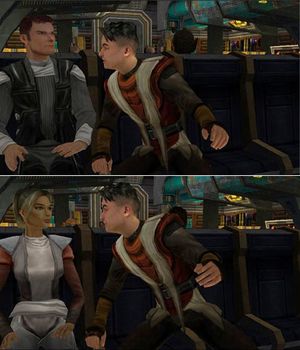 Two examples of how the game starts, depending on the player's choice of gender and clothing.

An early decision to be made during development was whether or not to use Kyle Katarn as the playable character. This was due to the character already being a powerful Jedi Knight, and starting off with the force skills would affect the gameplay.[1] To resolve this issue, Raven chose to make the playable character a student in a Jedi Academy. By using a completely new character, the developers were able to insert features that allowed the player to customize their character. Customizable features include the race and gender of the character, and the lightsaber color, hilt and type. The Kyle Katarn character was then made an instructor in the academy and integral to the plot to ensure that Jedi Academy was built upon the existing Jedi Knight series storyline.[1] Raven extended the customization further as the game progresses by allowing the player to choose specific force powers to train upon completion of missions. This was done with the intention of giving freedom to choose the way and style the game is played.[3]

Another decision made early on was to include locations and aspects from the Star Wars movies. The designers desired locations such as Tatooine and Hoth, as well as the Rancor creature.[1] To develop the map for Hoth, a location featured in The Empire Strikes Back, the designers obtained as much source material as possible so to create an authentic reproduction. Level Designer Justin Negrete says that Hoth was one of the most challenging areas to design.[4] The general level design process started by planning out the level on paper. These ideas were then "fleshed out" to get the size and flow of the level. Once this had been done, features of the Quake III Engine were used to add more detail such as lighting effects. The final stage of level design was adding aspects that improved the gameplay and fun of the level.[5]

The mission based format of Jedi Academy was used by Raven to reduce the linearity of the game, allowing the player to progress through levels mostly in the order they desire. The reduction in linearity was also achieved by only requiring that 80% of levels be completed before the plot can move on.[6]

Raven provided modding tools with Jedi Academy, however the company specified that they're unsupported by customer support, so to avoid receiving many calls on the subject. Brett Tosti, a producer for Lucasarts stated the opinion that the customization of the player that is provided by the game out of the box will mean that people are less likely to need to create their own "skins".[3]

Both the PC and Xbox versions of the game were well received.[7][8] Positive reviews praised the fact that, unlike Jedi Outcast, players could use a lightsaber from the beginning. Game Over Online Magazine commented that "You start instantly with your lightsaber, rather than wading through six painfully bland FPS levels to get your lightsaber as you did in Jedi Outcast".[9] Critics lauded the lightsaber and player customization options: "You choose not only the gender and race of your character, but also which powers and fighting styles to develop," noted Gaming Age. "Third person adventure games rarely offer that much customization."[10]

Critics noted that, despite its age, the Quake III engine was used well.[11] "The Quake III engine, which although hardly groundbreaking any more perfectly evokes the glow of the lightsaber and the grimy, metallic backgrounds of the films," commented PC Gamer UK.[12] Some critics did, however, note that the engine was starting to look dated.[9][10][11] The multiplayer, in particular the objective-based Siege mode, was well received.[13][14] Jedi Academy's music,[12] sounds effects,[14] and voice acting[11] received acclaim, though some critics found it odd that all aliens spoke English.[14][15]

The story and level design received mixed reactions. Some critics commended the levels as varied (both in terms of length and content): "Some are a fast blast that can be beat in ten or so minutes. Others... can take as long as hours," GameZone observed, "The change of pace is very refreshing."[10][11] The story was described as "great"[15] by GameZone and as "strong"[10] by Gaming Age. Game Over Online was more critical of the mission structure: "This kind of free-form mission assignment... only serves to weaken the plotline. It also leads to a disjointedness to the missions... it seems more like roaming than any actual story advancement."[9] IGN remarked that "Jedi Outcast was more satisfying in terms of involvement with the story. Jedi Academy dishes out more action sooner but fails to put it in as solid a context as the previous game."[14]

The AI was criticized by PC Gamer UK as "laughable": "Every encounter you have is filled with people too stupid to realise that running away or taking some sort of cover would be the best option... [Jedi Academy] requires little to no skill to play through."[12] This opinion was echoed by GameSpot: "Stormtroopers usually just stand there shooting away at you... Dark Jedi rush at you, even after watching four of their brethren plummet to a horrible death. Occasionally, you'll see an enemy accidentally commit suicide by falling off a cliff or falling into lava."[13]