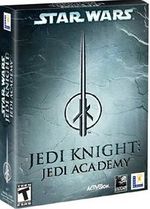 Star Wars Jedi Knight: Jedi Academy is a Star Wars first-person shooter/third-person action computer game released in September 2003. It was developed by Raven Software and published, distributed and marketed by LucasArts in North America and by Activision in the rest of the world.

The game is powered by the same version of the id Tech 3 used in its predecessor, Jedi Outcast, containing modifications to the Quake code to give a third-person view and new lightsaber effects (Jedi Knight II had these 3rd person effects as well). Players have the ability to construct their own lightsaber by choosing the hilt style and blade color. After completing certain objectives, new saber styles become available including the ability to wield two independent sabers in a style known as Jar'Kai, or the double-bladed lightsaber.

Players take the role of Jaden Korr, a new student recently arriving at Luke Skywalker's Jedi Academy on Yavin IV. Jaden, along with fellow initiate Rosh Penin, becomes an apprentice to Kyle Katarn (the protagonist of Jedi Knight) at the beginning of the game. As a Jedi Apprentice, the player is dispatched to accompany Kyle on various peace-keeping missions across the galaxy, many of which involve battling an emerging Sith cult known as the Disciples of Ragnos who are stealing Force energy from Force-rich locations across the galaxy.

Eventually the player learns that the Sith Cult is lead by Tavion, the former apprentice of Kyle's old arch-nemesis Desann from Jedi Outcast. Seeking revenge against Kyle, Tavion has recovered a Sith artifact known as the Scepter of Ragnos, which has the power to drain and release Force energy. Seeking to restore the Sith and destroy the Jedi, Tavion plans to resurrect the ancient Sith Lord Marka Ragnos by fueling his long dead body with a massive concentration of stolen Force energy.

The story has two different endings, depending on which side of the Force the player chooses. After learning that Rosh has betrayed the Jedi and joined Tavion, the player can choose between killing him (and thus turning to the dark side) or letting him live (and staying on the light side).

If the player chooses the light path, Rosh is rescued by Kyle and Jaden returned to the light side. Jaden heads to the Tomb of Ragnos to prevent the resurrection, while Kyle takes Rosh back to safety. Jaden confronts Tavion, then engages in a final duel with the resurrected Marka Ragnos (whose Force ghost possesses Tavion's body). After defeating Ragnos, Jaden destroys the Scepter, banishing Ragnos' spirit back into its tomb. The game ends with Jaden leaving the temple, and bringing down the entrance so that no one will enter again. He meets up with Kyle and Luke and explains what happened.

If the player decides to follow the dark side of the Force, Jaden kills Rosh, but refuses to join the Sith or help resurrect Marka Ragnos (as they are too "weak" to be worthy of his/her loyalty). Jaden kills Tavion to steal the power of the Scepter of Ragnos for himself/herself, but is intercepted by Kyle. Master and Apprentice have one final duel. Jaden knocks out Kyle with a blast of Force energy from the Scepter, and takes over an Imperial Star Destroyer to embark upon a campaign of conquest. Kyle, who is recovered from Korriban by Luke, takes a break from the academy to search for Jaden and try to turn him/her back to the light.

Originally, it was unclear which ending was canonical, but later, a Wizards of the Coast article describing Jan Ors' backstory for the Star Wars Roleplaying Game, stated that Jan Ors teamed with Jaden Korr to locate Master Katarn's whereabouts, implying that Jaden remained a servant of the light.