The game is the sequel to Star Wars: Knights of the Old Republic, which was widely regarded as a major commercial and critical success. The original game, however, was developed by a different company, BioWare Corporation. According to the game's producers, the change of developers was primarily due to BioWare's occupation with other titles, such as Jade Empire, Dragon Age: Origins and Mass Effect. BioWare is understood to have recommended Obsidian Entertainment as an alternative developer, having worked with many of Obsidian's key members when they were part of the now-defunct Black Isle Studios. The Sith Lords was constructed using an updated version of the original Star Wars: Knights of the Old Republic game engine, Odyssey, which Obsidian obtained from BioWare.

The Sith Lords was constructed using an updated version of Knights of the Old Republic's Odyssey game engine, which Obsidian obtained from BioWare. BioWare also provided technical assistance to Obsidian's developers. Material created for the game but not integrated into it remains in the released source files.

There are three official patches for the game. Two update the quality of the movies and music while the third fixes gameplay issues and introduces additional content.

The game takes place approximately five years after the conclusion of the first game, focusing on a different set of characters. The conclusion of the first game varied depending on the choices of the player, with either the Light Side or Dark Side of the Force emerging triumphant. At the beginning of The Sith Lords, players have the choice to specify (indirectly, through dialogue choices) which of Revan's outcomes they wish the sequel to follow; if the player skips the dialogue though, it's assumed that Revan was a male who followed the light side. Regardless of how the original game ended, the beginning of The Sith Lords sees the Sith Order having almost completely destroyed the Jedi Order. The character whom the player takes control of is a Jedi Knight exiled from the Order, and is thought to be one of the last remaining Jedi, known simply as the Exile or Jedi Exile.

Among the new characters that join the main character are Kreia, who acts as a mentor to the main character, and Atton Rand, who acts as the ship's pilot. Several characters featured in the first game are also brought into this sequel. Enemies include Darth Sion, a Sith Lord whose shattered body is held together only by "his hatred and the power of the Dark Side". The new planets which the character may visit include war-ravaged Telos, the planet of Onderon and adjacent jungle moon Dxun, Nar Shaddaa, and Peragus. Korriban and Dantooine, which appeared in the original game, are also revisited. The Ebon Hawk, the ship used by the main character in the first game, once again makes an appearance as the player's transportation. 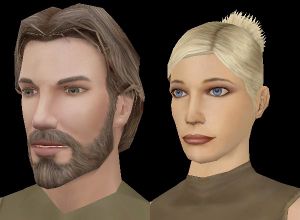 Two of many selectable faces for the protagonist

During the course of the game, the player (as The Exile) meets a great number of other characters, though some are encountered only through specific actions.

Other characters met along the way include:

The game is played over numerous planets in the Star Wars universe:

Dantooine and Korriban are two crucial planets from the first game. Korriban is significantly shorter in gameplay time than in the first game, whereas Dantooine is of comparable or possibly longer time.

Telos, mentioned heavily in the Carth Onasi subplot from the first game, is seen for the first time.

The Ebon Hawk is the player's ship, used for transportation from one location to another. Several minor occurrences can occur there, primarily in the form of character-to-character dialogue that can upgrade an NPC's abilities.

Star Wars: Knights of the Old Republic II boasts several improvements over the original game's features, allowing for a wider variety of tactics and opportunities for players.

In the first Star Wars: Knights of the Old Republic, if the player acted in a way contrary to his/her companion's alignment, the player would receive a verbal berating with little to no consequence. In Star Wars: Knights of the Old Republic II - The Sith Lords, an influence system was introduced, allowing a greater depth for gameplay. The player's influence over a character can determine whether or not sub-plots will develop, as well as increasing both the party member's statistics and the player's.

Influence can be gained by performing actions that a party member approves of. For Light Side-oriented characters, such as Mira, this could involve sparing someone's life. For Dark Side-oriented characters, such as HK-47, influence can be gained by violent acts, such as inciting a mob to violence. Influence is lost in a similar manner. Opportunities for gaining or losing influence are not always clear, though some are.

An excellent example of the potential rewards of the influence system can be found in HK-47. Once the player has enough influence, HK-47 will feel secure enough to confide in the player the various methods that he has used in the past to kill and/or break Jedi. The knowledge he shares increases the player's statistics greatly.

In addition to the influence system, one of the improvements this game has over its predecessor is the ability to train party members to use the Force, and to choose the Exile's Jedi class at the beginning of the game. With the exception of the three droids (not including Bao-Dur's remote), Mandalore, and Hanharr, every party member can be promoted to a Jedi class(Handmaiden/Brianna,Disciple/Mical,Mira and Bao-Dur. Even though these promoted Jedi do not have as many Force Powers as the Jedi Exile, Kreia, or Visas, they nevertheless become considerably better warriors.Training the crew to become Jedi is no easy task, it requires much influence and time. There are methods to train the crew. EX.1, Be a pacifist to get Mira to get influence.EX.2, Train with Handmaiden. Do not do things that they don't like or The Jedi training is in peril.

Items such as armor, melee weapons, blasters, and lightsabers were often marked as upgradeable in the first Star Wars: Knights of the Old Republic. However, this system was overhauled for the second game. The first game presented relatively few upgrade items; armor was restricted to an underlay and an overlay, and the effects of one or the other varied from armor to armor. In the sequel, there are now numerous upgrade items, each bestowing a different ability, regardless of the item it is applied to.

The number of upgradeable items has also increased. For example, lightsabers in the first game only had three upgradeable components: two focusing crystals, and a color crystal. In Star Wars: Knights of the Old Republic II - The Sith Lords, there are an additional three slots: emitters, lenses, and energy cells. The combination of these six items allows for high level of possible item combinations, increasing the game's replay value.

In addition, the player can create various items from raw materials. Weapons and upgrade items can be manufactured at workbenches out of Components (unwanted items can be broken down into their base Components for item creation). Other items, such as explosives, implants, and utility items are created at lab stations out of Chemicals (similar to Components, unwanted items can be broken down). The amount of Components or Chemicals received in a breakdown or used in creation depends on the player's level in the Repair and Treat Injury skills, respectively.

T3-M4 can be used as a mobile workbench, but only for upgrades and computer spikes which he will give you for free. Also, when the Exile is female, the Disciple is equivalent to a lab station.

References to the trilogies[edit | edit source]

During the game, one can find many references to the Original Trilogy and the Prequel Trilogy. One of the most obvious is the similarities between Atton Rand and Han Solo. Both are scoundrels. Both of them pilot the ship and use the common phrase "I have a bad feeling about this."

In the beginning of the game, if the character is female and has unlocked an easter egg, before releasing Atton from his prison, he asks "Are you an angel?" which is a reference from The Phantom Menace, where Anakin asks Padme the same question. Atton then says "I hope some poor kid doesn't use it."

There are other references to the trilogy in the dialogue. If the character is light and talks to Vaklu just before he is fought, a dialogue choice will come up. It says "You'll find I'm full of surprises," a phrase first used by Luke Skywalker in The Empire Strikes Back, and again by Anakin Skywalker in Attack of the Clones.

Also, when showing Mira to become a Jedi, one of the conversation options is "You've taken your first steps into a larger world", a phrase spoken in Episode IV when Ben Kenobi is training Luke Skywalker.

At the end of the game, the player can ask Darth Traya about the future before she falls into the core. If asked about the Republic's fate, she says the Republic will fall in a few millennia, an obvious reference to the plotline for most of the films. Also, Traya foresees the death of Jango Fett at Mace Windu's hands when she talks about the fate of the Mandalorians.

The game contains a sizeable number of bugs, which can affect gameplay. Also, some of the content from the game proper appears to be missing, though much of it can be found inside the game files. Evidence of additional cut material can be located within the various sections of the game files, ranging from unused sound clips to early modules meant for use in a cut planet.

Despite the feelings of negativity towards the game's cut content and incomplete state, the game was generally well received by fans and critics alike. Mirroring the success of the first game, The Sith Lords has garnered over thirty five "Game of the Year" awards.[1] The game received high marks from major reviewers - 8.5/10 from GameSpot, 4.5/5 from Gamespy and 93% from IGN. Based on 30 professional reviews, Metacritic gave the game an average rating of 85 out of 100,[2] compared to 93 of the original KotOR.[3]

There were three official patches released for the game, two of them update the quality of the Movies and Music while the third fixes gameplay issues as well as addresses some additional content. Some users have reported that the latest patch causes their game to be unplayable, a major problem since some of the fixes are necessary to complete certain parts of the game.

In January 2006, the gaming website IGN speculated that a sequel to Star Wars: Knights of the Old Republic II - The Sith Lords was in development with an estimated release of 2007. However, LucasArts and Obsidian have not announced anything regarding the possibility of a sequel's development.

Hope for the series has been renewed with a statement made by Nancy MacIntyre, VP of global sales and marketing for LucasArts, who recently said that the Star Wars: Knights of the Old Republic series will not be left behind.