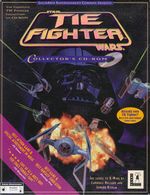 TIE Fighter is the sequel to Star Wars: X-Wing, and the first game of the series that puts the player on the side of the Galactic Empire. A notable improvement is the flight engine, which supports Gouraud shading, an effect that makes curves and mass appear more realistic. There are many flight options added, like flight dialogues and messages, a message log, a list of objectives, ships' status and behaviour, a three dimensional heads-up display, a sub-target system, and other improvements. The HUD or targeting computer (showing a miniature polygon of the targeted vessel) was much lauded by players since it allows the player to see the target's relative orientation (and avoid dangerous head-on confrontations) and specifically target individual components such as weapons batteries. The ability to match speed with a target lets the player tail an enemy with less risk of collision.

The briefings are also richer. Apart from the standard schematic map, the player has the ability to talk via a dialogue menu to both an Imperial officer and a "cloaked figure" - a Sith working for the Secret Order of the Emperor.

The game begins soon after the Battle of Hoth. The player assumes the role of a rookie TIE fighter pilot. Despite playing on the side of the Star Wars saga's "villain", the player's role is somewhat sympathetic, not only because he lives in fear under the shadow of Darth Vader and other unforgiving superiors, but also because the game's portrayal of the Empire—dictated, of course, by the player's superiors—focuses on its role as a guardian of order. The main character of TIE Fighter is Maarek Stele, although his name is only revealed in the official strategy guide as well as a novella entitled The Stele Chronicles that came with the initial release versions of the game.

Instead of constantly fighting against the Rebels, many missions deal with the elimination of pirates and other criminals, as well as civil wars, traitorous Imperials, and otherwise maintaining order in the galaxy.

In addition to the standard mission briefing, there is a secondary briefing available in some missions, given by a mysterious figure who belongs to the Emperor's Inner Circle. This person briefs the pilot on the secondary and optional objectives. Successfully completing them doesn't alter the scenario or the overall success of the mission, but initiates the pilot in an Imperial "secret society." These secondary briefings also reveal significant plot points, such as evidence of Admiral Harkov's treason.

The story evolves in seven different systems, separated into seven tours of duty of four or more missions each.

The original game ends with the player preventing a coup against the Emperor and being personally rewarded during a large ceremony reminiscent of the Yavin celebration at the end of Star Wars Episode IV: A New Hope.

Besides allowing the player to fly the TIE fighters, TIE bombers, and TIE interceptors seen in the films, the game also adds new craft with shields, weaponry, and hyperdrives. These included the Cygnus Assault Gunboat, TIE advanced, TIE Defender (added to the Star Wars: Essential Guide to Vehicles), and Cygnus Missile Gunboat (in the Defender of the Empire and Enemies of the Empire expansion packs).

In the early missions, the conventional TIE Fighters and TIE Interceptors were often equipped with a small load of warheads. While theoretically possible in the "real" Star Wars universe, that would also potentially compromise speed and protection.

In fact, by the fifth campaign, the new TIE craft completely replace the movie fighters. As a result, the gameplay ends up similar to X-Wing, since the player's side does not feature mass overwhelming attacks with expendable craft (as the Empire would do at the height of its power), and often the player does not have the benefit of wingmen. This can be partially explained by the player being part of a special task force headed by Thrawn, tasked with destroying the rogue Grand Admiral Zaarin.

TIE Fighter and the Defender of the Empire expansion pack introduce many craft that never again appear outside the X-Wing computer game series. Examples include space platforms, the Mon Calamari Light Cruiser, R-41 Starchasers, and T-Wings (although T-Wings are referenced in some Star Wars novels).