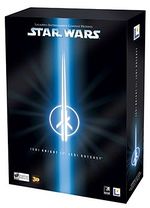 Star Wars Jedi Knight II: Jedi Outcast (often abbreviated JK2 or JO) is a first- and third-person action game developed by Raven Software and published by LucasArts and Activision. The PC version was released on March 28, 2002. Versions for other platforms followed: the Mac OS version was released on November 5, 2002, and the Xbox and Nintendo GameCube versions on November 22, 2002. Powered by id Tech 3, the game primarily revolves around ranged and melee combat. The player can wield classic Star Wars weapons such as blasters, lightsabers and Force powers.

The game features both single player and multiplayer modes. The story-driven single player is set in the Star Wars universe two years after the events of Mysteries of the Sith, Jedi Outcast's predecessor. It follows the protagonist Kyle Katarn as he fights against the Dark Jedi Desann and his followers.[6] The game was critically well-received on all platforms. In 2003 a sequel titled Star Wars Jedi Knight: Jedi Academy was released. In 2006 the PC version was re-released with four other Star Wars games in a pack entitled Star Wars: The Best of PC.

Jedi Outcast's gameplay is similar to that of its predecessor. The player moves through the single player in a linear manner, meeting friendly and hostile NPCs. Enemies are usually killed with blasters a lightsaber or Force powers, and friendly NPCs will occasionally assist the player. While most of the game involves dispatching enemies single-handedly, there are several puzzles which the player must solve. The single player also involves sections in which the player controls turrets, although such set-pieces are rare.

After the first few missions of Jedi Outcast, the player can use a lightsaber. As in the films, lightsabers can be used to deflect shots from blasters. The player gains access to three "stances" which a lightsaber can be used in as they progress. Each stance is different in terms of the speed of attacks and damage dealt. There are a number of combos which can be used, often unique to the selected saber stance.

With the lightsaber, Force powers (such as Push, Mind Trick and Lightning) become available. Powers are available in singleplayer and multiplayer, but more powers can be used in the latter. The use of powers is restricted by a "Force Meter", which depletes with use of powers. As the single player game progresses, the number of powers available and their level increase. The "level" of a Force power determines the strength of the power and the amount of Force "power" required for its use.

Jedi Outcast features a set of multiplayer modes. In the PC and Macintosh versions, these can be played over LAN or the Internet, but is limited to two players on the console versions. There are a variety of game modes (examples are free-for-all, team free-for-all and capture the flag) which can be played with other players, bots, or both. However, some players have taken the game beyond this level, adapting rituals such as "bowing" (crouching and bowing one's head down before a duel). The one-on-one master/padawan training system from the films has been adopted by some clans.