Star Wars Trading Cards was a Collectible card game designed by Richard Garfield and published by Wizards of the Coast (the same company who produced the cards for the Pokémon Trading Card Game) in 2002. In 2005 they were put on hold, and haven't been heard from since. 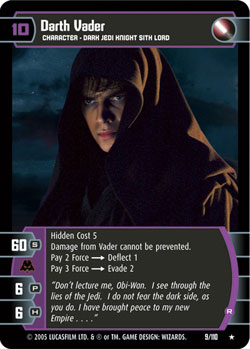 Cards have been broken up into several categories.