Star Wars Trilogy Arcade is an arcade game first released in 1998. The game is a 3-D rail shooter based on the original trilogy of Star Wars films and was released along with the special editions of these films. Sega also released an accompanying pinball game. The game is not to be confused with Star Wars Arcade, another Star Wars game released to arcades by Sega in 1993. 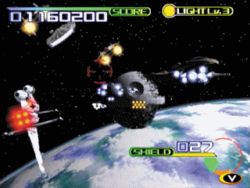 Normal gameplay involves the player moving a crosshair around the screen using a joystick and pressing the fire button atop the joystick to shoot. A "special event" button lights at certain points of the game and when pressed, triggers an event to happen onscreen. The game puts the player in several key battles of the Star Wars films with one mission for each original Star Wars film. The player selects which film's mission to play first and each mission has two parts.

The Star Wars Episode IV: A New Hope mission has the player reenacting the final space battle at Yavin as an X-wing fighter confronting TIE fighters. The second part of the mission involves destroying the Death Star.

In the Star Wars Episode V: The Empire Strikes Back mission, the player reenacts the film's opening battle on Hoth. The first part of the mission involves shooting AT-ST walkers and probe droids, and helping other snowspeeders to take down the giant AT-AT walkers. The second part of the mission has the player reenact the escape from Hoth, running through corridors of the rebel base, shooting stormtroopers and wampas while trying to get to the Millennium Falcon.

The Star Wars Episode VI: Return of the Jedi mission begins with a reenactment of the speeder bike sequence on Endor from the film, where the player must shoot stormtroopers on their own speeder bikes. The second part of the stage has the player moving towards the Empire's base on Endor, shooting any enemies on the way. The mission is the only mission in the game to have a third part, in which the player must shoot at an AT-ST walker with a blaster.

The game also features several bonus stages that become available after completion of a certain number of missions. The first one has the player blocking blaster shots from Boba Fett with a lightsaber. The second one involves the player dueling Darth Vader in Return of the Jedi.

The game's final mission has the player destroying the second Death Star in an X-Wing.