Starmie (スターミー, Sutāmī?) is a fictional character of the Pokémon franchise.

The name "Starmie" comes from the word "star" and a misspelling of the word "me", the same way Staryu comes from "star" and "you". Its name was originally going to be Starme. Mie can also be related to its beauty and mysterious aura as it means appearance, vanity and charm in Japanese.

Starmie is an aquatic Pokémon. It moves through the water by spinning its star-shaped body in a manner like that of a propeller. Starmie's body has a highly symmetrical geometric shape, no matter what the surroundings it lives in.

Starmie resembles an overlarge starfish. It consists of two five-point purple star-shaped structures superimposed on top of each other. As displayed in Pokemon Colosseum and Pokemon XD: Gale of Darkness, Starmie can twist and turn its body in a wiggly, starfishlike way. At its center is a large gem, surrounded by a golden crest like structure. Starmie's center section - the gem - is known as its "core". This gem is considered very valuable among collectors. It can glow in all seven colors of the rainbow, and changes color frequently. In the Pokémon world, the aforementioned peculiar properties of Starmie's anatomy leads some people to theorize that Starmie's origins are not of this planet and that its luminescent core is used to send electromagnetic signals into outer space. In ancient times, Starmie was attributed an equally mystical origin: that it was created from the reflection of the stars upon the waves at night. When Starmie is weak, the core grows dim and starts flickering whilst producing distinctive warning sounds. The gem's hue can change to any color in the visual spectrum, earning Starmie the nickname "the gem of the sea".

Its Shiny version changes its violet hide to an azure blue and its gem to a similar but slightly darker hue of blue. The crest like structure that surrounds its core changes from gold to rose pink.

Starmie is a quite powerful Pokémon. It has generally high stats, especially in Speed and Special Attack, complemented by knowledge of powerful attacks that match its types (Surf and Psychic). Through Technical Machines, Starmie can learn attacks that are strong against Pokémon who have an advantage over it. Its somewhat low hit points stat is offset by its knowledge of techniques like Recover and Cosmic Power. For these reasons, Starmie is a rather popular Pokémon in competitive battling, and can be used in an offensive role, or slightly defensive role.

Since the player can choose to evolve Staryu into Starmie at any time through a Water Stone, care must be taken regarding the point of evolution, as there are certain moves that can only be learned as a Staryu.

Starmie has a minor cameo in Super Smash Bros. as one of several Pokémon which may emerge from thrown Poké Balls, where it rapidly fires stars at enemies using Swift. It is replaced by Staryu in the sequel, Super Smash Bros. Melee.

Starmie can also found in the Nintendo 64 game Pokémon Snap in the Valley Course. Staryu float in the air, and if successfully photographed, they will circle around the player’s vehicle until a large whirlpool in the course comes up, at which each photographed Staryu will enter the whirlpool and evolve into a Starmie which can be photographed.

Starmie is also owned by gym leader Misty to use in battle.

Starmie has a very recognizable personality in the anime to those familiar with Japanese pop culture. More than any other Pokémon in the anime, Staryu and Starmie share the mannerisms of their cultural basis, the 1960s television hero Ultraman (Staryu's original Japanese name Hitodeman is the ultimate clue as hitode is Japanese for starfish). Staryu's movement and sound mimic Ultraman, but the most noticeable similarity between them is the jewel on their chests. When Staryu and Ultraman are low on energy, the jewel begins to blink and chime a warning alarm. Although Starmie differs a bit from her pre-evolutionary form, she shares several of the same Ultraman characteristics and may have been based on the female Ultraman's female ally Astra.

Starmie is one of the Pokémon used in Misty's team during the most of the Kanto arc (during which it is her most powerful Pokémon), along with its pre-evolved form, Staryu. Misty also often used Starmie outside of battle for transportation through water or for fire-fighting purposes. Misty eventually left Starmie in the care of her sisters at the Cerulean City Gym in episode #61 (The Misty Mermaid). She re-obtained it when she returned to the Gym after episode #275 (Gotta Catch Ya Later), as depicted in Pokémon Chronicles.

In Episode 103 (Misty Meets Her Match), a Starmie has been used by the Trovita Island Gym Leader, Rudy. In his Gym Battle with Ash, Rudy had Starmie battle Ash's Squirtle.

In the Pokémon Special manga Starmie is one of Misty's Pokémon, it makes a cameo in the Red, Green & Blue chapter in Gyarados Splashes In! in one of her Pokéballs, however it debuts later in its round Suddenly Starmie defeating Red in the Cerulean Gym. 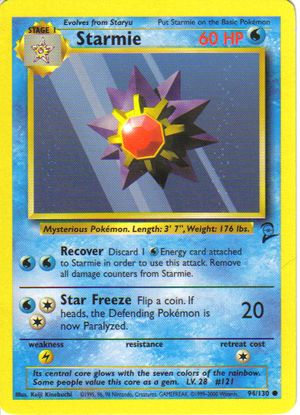 Starmie appears on a lot of cards in the game, partly due to its blend of Water and Psychic abilities and its stage 1 status. It appears in all the following sets: