Steel Talons was originally an arcade video game by Atari Games, and was released for the Sega Mega Drive/Sega Genesis, the Atari Lynx handheld, Atari ST, Atari Falcon and SNES. In the arcade, it came as a two-player cockpit cabinet and featured both cooperative and competitive game play modes. 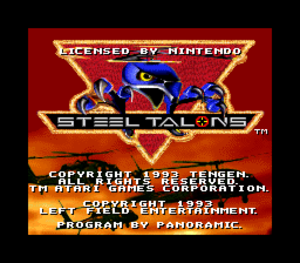 The player takes on the role of a pilot for an "AT1196 Steel Talons combat helicopter". The game's helicopter is equipped with a machine gun, rockets, and a limited number of air-to-surface missiles. Several missions are available for play, and completing early missions unlocks later ones.