Steelix (ハガネール, Haganēru, Haganeil in original Japanese language versions) is one of the 493 fictional species of Pokémon creatures from the multi-billion-dollar Pokémon media franchise – a collection of video games, anime, manga, books, trading cards and other media created by Satoshi Tajiri.

The name Steelix comes from its Steel type and from its pre-evolved form, Onix, whose name is derived from onyx and oni.

Steelix's appearance is highly similar to that of its pre-evolved form, Onix. However, it is around two feet longer (in the generation of the Gold and Siver versions, Steelix was the longest measuring Pokémon at over 30 feet long, but it lost that honor to Wailord of the Ruby and Sapphire versions, at 47+ feet long), its body or at least its surface is comprised of steel, some of the boulder formations that make up its body have spikes growing out of them, its tail ends in a sharp point, and it has a large and prominent jaw. Although within the games Steelix is normally acquired only by trading Onix (see below) the Pokédex suggests that an Onix can essentially evolve into Steelix if it lives long enough and digs deep enough.

According to the theory, as an Onix grows older, it burrows deeper underground. Around the age of 100, the pressures exercised on its stone body become so high that it is compressed into a much harder, diamond-like composition, although it is closer to metal in nature. Steelix's multi-faceted body reflects bright light very well, giving it a shiny, glittery appearance.

Steelix continues to burrow underground like it did as an Onix, but it reaches far greater depths, reaching records of up to 0.6 miles (900 metres) while heading for the earth's core.

A male Steelix will have four tooth-like structures on its lower jaw (two on each side), whereas a female will only have two (one on each side).

Steelix first appears in Pokémon Gold and Silver, and is the final form in the Onix evolutionary line. It evolves from Onix by being traded while holding a Metal Coat. It was only available through evolution until Pokémon Diamond and Pearl, in which it can be obtained in the wild. In the 4th generation pokedex, its posture and the view it is viewed from is nearly identical to that of Onix.

Steelix first appeared in episode #226 (Nerves of Steelix) under the control of Jasmine, the Olivine City Gym Leader, who used it in her badge battle against Ash. Steelix was also used by a Team Rocket member against the protagonists of the Raikou-Legend of Thunder special, as well as by Harrison against Ash in the Silver Conference. Another one appeared in episode #334 (All Torkoal, No Play) antagonizing a Torkoal that went on to join Ash's team. Morrison, one of Ash's rivals in the Hoenn League, owns a Steelix. Later in the series Brock's Onix has evolved into a Steelix. In #491 (Roaring Steelix! Protect Bidoof Village!), Ash and co. are chased by a giant, rampaging Steelix.

In Pokémon Special, Jasmine used a Steelix disguised as an Onix in the Gym Leader's Tournament. 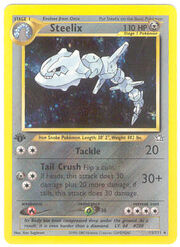 Steelix has appeared on a good number of Pokémon cards throughout the game’s history. Each card is Stage 1 and Steel-type unless otherwise noted:

Shining Steelix is considered useless and downright dubious in its battling structure because it has an extremely expensive attack (two metal energies and two ground energies) that, though it can do 80 damage and 10 damage to benched Pokémon to both sides, both depends on a coin flip and cannot be used twice in a row, whether or not the coin flip landed heads. In the views of card game players, this means that the damage is averaged down to 20 damage per turn.

Dark Steelix is the first Pokémon card to be both Dark and Steel-type, although Dark Scizor, of Neo Destiny, was a metal type with "Dark" in its name, meaning it, too, is able to gain the extra abilities of the Dark Energy Cards.

Many gamers, however, still question the fact that Steelix is not the heaviest Pokémon. Another steel-type Pokémon called Metagross is significantly heavier than Steelix, according to the Pokédex. Oddly enough, Metagross is just over one-fifth of Steelix's size. However, this is prevalent across the entire range of species, as the 47-foot Wailord weighs merely 880 pounds while the 6-foot Snorlax is half a ton in weight. The current record is held by Groudon, who weighs just over 2,000 pounds.

Steelix EX, like many of the EX cards nowadays, has 2Weaknesses, 2Retreat Cost. One of the unique features, however, is its high retreat of 5.