Street Fighter Alpha, renamed from an American working title of Street Fighter Legends (Street Fighter Zero in Japan), again on the CPS-2 arcade board. This featured a completely new graphics engine and an entirely new gameplay system. Street Fighter Alpha represents the first overhaul of the Street Fighter series since its de facto inception 4 years earlier as Street Fighter II. Characters were drawn in an anime style and were meant to look more youthful than in their Street Fighter 2 incarnations. Perhaps most controversially, only 4 of the 10 initially selectable characters were from Street Fighter II: Ryu, Ken, Chun-Li and Sagat. The final boss differed depending on which character you selected, however most of the fighters would face off against M. Bison, who was selectable as a hidden character, as were Akuma and a new character called Dan, a tongue-in-cheek revision of the Ryu/Ken mold with references to SNK characters. The anime-like design of the characters (as opposed to the earlier attempts at realism) were seen as a direct consequence of Capcom's experiments with the Darkstalkers series, which had been introduced a short time before and had been popular.

The fighting system of Street Fighter Alpha is based on those of previous Street Fighter games, with a different super combo gauge from that of Super Turbo. The super combo gauge, similar to Darkstalkers, was divided into three levels. The amount of super combo gauge that was required to perform a super combo depended on the number of buttons pressed, and later on, the strength of the button. The gameplay and characters used in Alpha were the basis of many Street Fighter spinoffs, and some characters considered to be central characters in the plot were first introduced in the Alpha series. Another change was the introduction of chain combos, which were chains of normal attacks that could be interrupted into each other. This would allow for an introductory system of chains not requiring the intricate timing of combos in previous games. However, the flipside to this was the simplicity with which long chains of damaging attacks could be performed, removing some of the strategy element of the series. The concept of "Alpha counters" ("Zero counters" in Japan and Asia) were introduced, a set of moves using a bar of super charge which allowed a character to make an immediate counterattack from a blocking position. The major purpose of this quickly became noted as being the best way for a player to protect themself from frequent unfair combination attacks, a term known as 'cheap.' (Fireball attacks used overly frequently were also referred to as cheap, leading Rose to become a minor because of her ability to reflect or dispel them.) Also, characters could roll out of situations when thrown or tripped to the ground.

One particular secret feature of Alpha that supports the claim that Alpha was inspired by the movie is the Dramatic Battle mode, in which two characters (Ryu and Ken) would fight a third (M. Bison) at the same time, similar to the ending of the movie (the background music for this particular battle is also the main theme of the movie). This feature was a fairly popular part of Alpha, and at least one version of each game would have a hidden option to fight in Dramatic Battles. 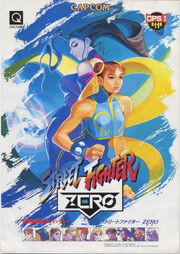 Some of the new characters (Guy and Sodom) were taken from older Capcom games such as Final Fight, while others (Birdie and Adon) were competitors from the original Street Fighter. The original characters were Charlie and Rose. Charlie was an American solider who would become the reason Guile sought vengeance in the subsequent battles. Charlie fought almost exactly like Guile did, leading several to question Charlie's inclusion as opposed to Guile's. Rose was an Italian gypsy who specialized in reading tarot cards. Her unusual style led some to compare her to a Darkstalkers character. 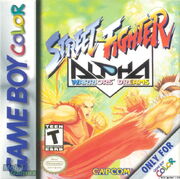 It is interesting to note, however, that this was the only game released on Capcom's experimental CPS-changer home system, essentially a modified CPS-1 without the encryption of the newer CPS-2 board. It also, perhaps more importantly, was released on the Sony PlayStation and Sega Saturn. The conversions were well-received, but were quite limited due to the smaller amount of RAM in the new-generation 3D machines, this problem particularly affecting the PlayStation conversion. The Saturn conversion were generally considered the best available, though they were not arcade perfect. Later Saturn ports utilised the RAM cartridges that were available for the machine so as to increase the animation quality of the games. Game Boy Color and PC versions were also made available.

The February 1996 issue of Electronic Gaming Monthly reviewed the PlayStation version. Among the four reviewers, three gave it 9 out of 10 while one gave it 9.5 out of 10, adding up to 36.5 out of 40. They awarded it Game of the Month, beating Virtua Fighter 2 the same month.[4]

Reviewing the Saturn version, the April 1996 issue of Sega Saturn Magazine commented, "The graphics are great, the sound's great, it plays very well indeed and it's tough enough to keep you going for ages even without a second player to hand." However, they also remarked that the game was outclassed by the recently released X-Men: Children of the Atom and that most gamers should get that one instead.[8]

Fans were left with the feeling that this was a game rushed out before its development was completed. The lack of balance and the dearth of refinement were mildly criticized at the time, but this was perhaps outweighed by the interest the game engendered in the franchise with its new visuals and more spectacular gameplay. The arcade scene was booming in the mid-90's, an era when home machines were still significantly less advanced than their arcade counterparts, and Capcom was at the forefront of the industry. Quickly producing a new product was in, and was more important than applying that time-consuming layer of polish to make the game really shine, and Capcom was becoming known for this, though overall it was a growing trend throughout the industry. Several magazines again reported the producers and programmers as saying upon the release of Street Fighter Alpha 2 that it was the game they had wished the original to be. Alpha did, however, further the story of the characters and add meat to their backgrounds, though this was scarcely the reason the games were played. Some fans were also disappointed that the animation was not feature fluid as Darkstalkers, while some also felt that the game was rushed for release, with a fewer number of characters and stages.