Subnautica is an open-world survival video game by independent studio Unknown Worlds, released onto computer platforms on December 16, 2014. Subnautica is currently in public alpha, with a newsletter releasing update notifications weekly on the Unknown Worlds website.

Subnautica pits the player as the only survivor of the Aurora, a spaceship that crashed into the ocean of an unknown alien planet. Using resources and tools inside the ships escape pod, the player can scavenge the ocean, through coral reefs, caves, and other deep-sea biomes scavenging for food and materials to build equipment, such as weapons, diving equipment, and even submarines. The player's ultimate goal is to use these tools and other skills they learn to survive and eventually discover a way off the planet. 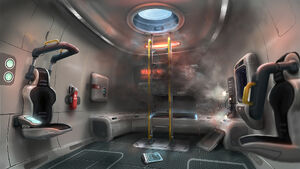 Subnautica can be played on 3 difficulty settings.

The player does not have to maintain their hunger or thirst levels but are still vulnerable to drowning and taking damage.

The player has to scavenge for food and water to survive; if the player dies, they will respawn with some of their inventory lost.

No second chances; if the player dies they have to restart from the beginning.

The player starts off inside an escape pod floating in the water that acts as the player's temporary base. Inside the escape pod, the player has a storage locker and a Fabricator. The player has to constantly monitor and sustain their health, hunger, and hydration levels, as well as their oxygen level when underwater. Fish can be captured and cooked for food, and water can be purified when mixed with other elements using the fabricator. Larger fish can attack and damage the player, as well as radiation and other environmental hazards. The player can craft medkits with a fabricator to heal themselves. Lastly, the player has to maintain their oxygen level when underwater, which can be replenished by revisiting the surface. The player can craft a variety of tools for maintaining oxygen, such as air tanks and rebreathers.

A Fabricator is used for crafting objects out of the raw materials the player scavenges from the ocean. The player can use the fabricator to cook fish and purify water, as well as to create basic tools and objects such as air tanks, diving masks and flippers, a knife, and other tools. The fabricator can even create another fabricator, that can be deployed to float on the surface of the water for building larger environmental objects such as submarines. The player can also craft Work Benches for upgrading objects beyond their default abilities.

In the ocean, the player can find a large variety of fish, metals, and other elements that can be combined and refined into usable tools and items. The player can grab small fish and hold them in their inventory, and cook them using a fabricator. Gold, copper, and other metals can be found inside of small rocks for the player to break open. Certain other unique items can also be found, such as underwater mushrooms, seaweeds, and salt deposits. The player can craft tools for navigating underwater, such as flippers, a handheld water jet, a minisub, and a full-sized submarine known as The Cyclops.

Subnautica features a variety of different underwater biomes, including caves, caverns and abysses, seaweed forests, underwater volcanoes, and even above ground floating islands. These different biomes each have unique creatures that inhabit them, ranging from plant life to fish and even monsters. The player can also craft underwater bases using a handheld fabricator and materials scavenged from the ocean, primarily steel and glass. The player must first fabricate a foundation, and can add individual rooms, corridors, aesthetic pieces such as windows, and solar panels to supply the base with power. The player can place fabricators, work benches, storage lockers, and other items that normally couldn't fit inside the cramped escape pod. Each foundation has a weight limit; if the limit is exceeded the base will collapse.

Subnautica runs on the Unity engine, and is currently in public alpha, meaning it is open to the public for purchase, but is unfinished and still under construction. The game's developer Unknown Worlds releases a weekly newsletter describing upcoming or just-released updates to the game. Due to Subnautica's alpha state, it has seen many updates and changes, most of which are considered "for the best" by the Subnautica gaming community. These updates include allowing fish to be cooked by themselves(originally requiring salt to cook). Other than changes to current aspects, the game is constantly gaining new and original aspects and game dynamics such as a terrain editing tool, that allows the player to quickly carve large chunks away from underwater rock formations. Large improvements and additions to the underwater base construction system. And the upcoming addition of cooperative online multi-player.