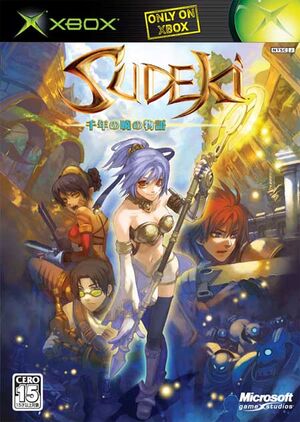 Battles in Sudeki takes place in real-time. You control one of the four characters while the computer controls the rest. Tal and Buki are melee fighters whose primary attacks are timed button combos. Ailish and Elco are both long-range oriented fighters. When your in control of either Ailish or Elco the game shifts into a first-person perspective to allow for greater accuracy.

Outside of battles each of the four characters have special skills that can be used to solve puzzles and get past obstacles. Tal can push blocks around, Ailish can dispel walls and certain obstacles, Elco has access to jetpacks which acivate close to crystal clusters, and Buki who can climb certain walls.

Sudeki is set in a world ripped in two. Here shadow and light battles for control of the world. Queen Luscia of Haskillia is upset that the Aklorians have begun to invade the countryside. The swordsman Tal, sorcerress Ailish, huntress Buki, and the scientist Elco battle to save their homeland.

The world of Sudeki is bright and colorful, however, many have questioned the choices in character designs. It is also the general consensus that the voice acting is abysmal and the music leaves something to be desired. The one saving grace of Sudeki seems to be the combat.