In its name, Sudo is a purposeful misspelling of pseudo (false), and woodo refers to its tree-like appearance; hence, Sudowoodo is a specimen of "pseudo-wood". The Japanese name, Usokkii, shares the same joke; it is derived from the words uso, false, and ki, tree. Also, the Japanese word for "liar" is usotsuki.

Interestingly, there is a minor enemy in the Famicom game Mother called "Woodoh", of whom Sudowoodo's appearance and stance are greatly reminiscent.

Sudowoodo can be seen as a petrified wood-like pseudofossil, as it is inorganic and could be mistaken for a fossilized tree. Crystal dendrites are a type of crystal in the real world that develops with a tree-like form..

Sudowoodo appears to be a bending, bipedal creature vaguely in the shape of a tree trunk. It has a double-prong-shaped protuberance on its head, tiny feet, a simple face, and a pair of three-fingered hands where the fingers are green spheres resembling leaves on a tree.

Sudowoodo is an intriguing creature. Its body, first of all, is made not out of wood, but rock, and that goes for the green spheres on its hands as well. Sudowoodo pretends to be a tree, with its body designed to look like a tree trunk and its green fingers masquerading as leaves for the trunk, as its form of camouflage, where it hides among forest areas to avoid being attacked by enemies. It earns its classification as the imitation Pokémon through its practice of imitating a tree in this fashion.

There are, however, several conditions under which Sudowoodo cannot hold up its camouflage. In the winter seasons, when trees are either white with snow or have had their leaves fall off from autumn, Sudowoodo is easy to spot as a fake because its hands remain green, making winter a more dangerous time for Sudowoodo to be in the presence of foes. Also, as a creature whose composition resembles rock, Sudowoodo hates water, so it will disappear and seek shelter when rainfall begins.

In Pokémon Diamond and Pearl, The Y shaped appendage atop a Sudowoodo's head is larger on a male than it is on a female.

Its appearance in the Gold, Silver and Crystal versions near Ecruteak City is indicated by a small tree icon blocking an important junction between routes. Upon using the Squirt Bottle item that is given to the player in Goldenrod City, the player enters battle against Sudowoodo, similar to the Pokéflute/Snorlax relationship in Red, Blue, and Yellow.

In Pokémon Emerald, it can be found in the Battle Frontier at the top of the Waterfall, and will be flustered and battle when the Wailmer Pail is used on it.

In Pokémon Pearl, Sudowoodo can finally be found in the wild, along with a new, also wild baby form Bonsly. To breed a Bonsly, the mother Sudowoodo must be holding the new item Rock Incense. In Pokémon Diamond, wild Sudowoodo and Bonsly are replaced with Mr. Mime and Mime Jr..

It can also be caught (or, in this case, snagged) in Pokémon Colosseum, as it appears in Miror B.'s squad as a Shadow Pokémon.

In Pokémon Colosseum and Pokemon XD: Gale of Darkness, there are two large rotating clockwise crystal or glass statues of Sudowoodo in front of Realgam Tower after the building's construction is completed.

Sudowoodo is not particularly widely used in competitive battling. It has very high Attack and Defense stats, but also has equally weak stats everywhere else. It can learn Mimic, Block, and Flail, and Endure (via a move tutor in Emerald or TMs in Gold/Silver/Crystal and Diamond/Pearl) to form a combo with Flail. However, this is hindered by its inferior speed. Nevertheless, Sudowoodo is a very strong Physical attacker. It is also a very rare example of a pure Rock-type Pokémon, whereas most others (Onix, Rhyhorn, and Geodude, for example) are of the dual Rock/Ground type.

Sudowoodo also makes a minor cameo in Super Smash Bros. Melee as a platform in Poké Floats, one of the stages. It is not recommended that players stay on it too long, though, as it will leave the screen immediately after appearing. It is also an unlockable trophy.

The major appearance of a Sudowoodo in the Pokémon anime was in the episode "Usokkie wa doko ni iru!?", which was named "Type Casting" when translated. In the episode, Team Rocket attempt to steal a Sudowoodo, and after doing so, stand perplexed at what type it actually is. In a notable scene, Team Rocket continually asked the Sudowoodo what its type was. They could not receive a straight answer, as, since "uso" means "false" or "lie" in Japanese and the extent of a Pokémon's speech patterns is its name, any answer the Sudowoodo could give would be negative. The confusion was compounded when Jessie's Wobbuffet released itself (as it tends to do in the anime). Since Wobbuffet's Japanese name (ソーナンス sōnansu) is a transcription of a common phrase of agreement (そうなんす sō nan 'su, a contraction of そうなんです sō nan desu), the only replies that Team Rocket received from the two Pokémon were strings of "yes" and "no". The scene was translated to English, but the original joke was largely lost.

Golden Sudowoodo are particularly unique because this type of Sudowoodo is only made by a scientific experiment which happened in the anime. While Sudowoodo are normally brown with green leaves, this one is golden and is also known as Shiny Sudowoodo (in the games, however, Shiny Sudowoodo are green and red, not pure gold). Shiny Pokémon are Pokémon with a different color than the common form, usually more golden and shiny. Shiny Pokemon are very hard to come by. Though no more powerful than their more common brown and green counterparts, the gold Sudowoodo are highly valued for their golden color and thus can be sold for large sums of money.

In the anime Pokémon episode "All That Glitters is not Golden!", Ash and May bump into a Golden Sudowoodo. Ash tries to catch it, but it gets away. Later, they enter a restaurant and find out that the Golden Sudowoodo is an extremely wanted Pokémon by everyone in the restaurant, later on the gang finds out that the Sudowoodo belongs to someone and that it wasn't always golden. The owner of the Pokémon, Keenan tried to give his Sudowoodo the ability to be unaffected by water, but instead the Sudowoodo turned golden and ran away. The Golden Sudowoodo ran away a few times when Keenan and the gang got close to it, and Team Rocket attempted to steal the Sudowoodo to give to their boss Giovanni, but Ash arrived in time with Keenan, May, Max and Brock. Keenan protected Sudowoodo, which made Sudowoodo return its trust to Keenan. Keenan later returned Sudowoodo back to its normal form.

In the recent episode "Leave it to Brocko," Bonsly frees itself and an injured Nuzleaf from one of Team Rocket's cages under Brock's order. Due to its excitement and courage, it starts glowing and evolves into Sudowoodo. What is significant about this particular Sudowoodo is that it gives a salute similar to that of Team Rocket's Wobbuffet. Whether or not this will be consistent in future episodes remains to be seen. It appears to have overcome its fear of water (a trait consistent of all Sudowoodo) in order to get the injured Nuzleaf to safety. Brock's Sudowoodo is now the main powerhouse of his team.

In the Pokémon Special manga, Volume 9, a Sudowoodo disguises itself as a tree in the middle of Route 37, hiding from a Rhydon. Gold convinced Sudowoodo not to run away from its problems, and Sudowoodo went on to defeat Rhydon in hand-to-hand combat. It soon after joined Gold's team.

A Sudowoodo is captured by Emerald at the Battle Frontier. It appears to be a female Sudowoodo, due to its motherly nature. 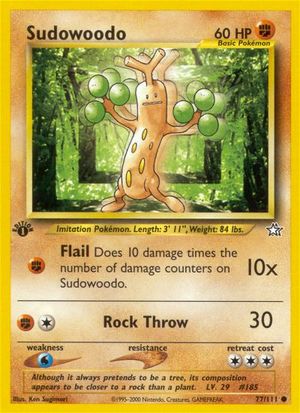 Sudowoodo is more of a novelty Pokémon in the card game than an actual warrior, so its array of cards is modest:

In each case, it is a Basic-level Rock/Fighting type.