Sunflora (キマワリ, Kimawari in original Japanese language versions) is a fictional character from the popular Pokémon franchise. It is #192 in the National Pokédex. It first appeared in Pokémon Gold, Pokémon Silver, and Pokémon Crystal and is the evolved form of Sunkern. It was part of the first big wave of pure Grass-type Pokémon from the second-generation of Pokémon; before this time, Tangela was the only pure Grass-type.

Sunflora's name is a portmanteau of "sunflower", which it resembles, and "flora". The second part, "flora", also refers to the fact that it is a flower, instead of an animal (fauna).

In Japanese, himawari is a sunflower and the Kimawari is an obvious take on that. Likewise, Sunflora's Chinese name 向日葵 directly translates as "sunflower".

Sunflora is a diurnal Pokémon; unlike its unevolved form Sunkern, it is wholly inactive at night. However, it is very active and playful during the day when the sun is bright. Like Bellossom, it evolves using a Sun Stone. Bellossom and Sunflora are the only Pokémon to do so, and it may be that a Sun Stone may have an effect on the Pokémon evolving. For example, Sunkern is active during the day and night. Upon evolution, however, it becomes strictly diurnal, and will become immobilized upon nightfall.

Sunflora prefer hot climates; their foliage becomes more colorful and elaborate as the temperature rises. Sunflora unfurl their petals and absorb sunlight for energy,since Sunflora require nutrition from the sun to function, and will lose their vivid colors from a lack of sun. It is possible for a Sunflora to absorb too much sunlight, though. When this happens, its head and petals become engorged and very heavy, which is dangerous for a Sunflora, since it can wilt and possibly get sick. At night, the petals are furled, covering Sunflora's face. In preparation for winter, Sunflora will migrate to warmer and sunnier areas, so as not to lose the vital source of their energy, the sun.

Sunflora like to live in flower patches. They do their best to stay hidden among the other flowers, but usually they are very noticeable. This is probably due to the fact that it is not as tall as real sunflowers and likes to play in the sunlight. This behavior is similar to Vigoroth's in a way. Vigoroth cannot stay still for even a second; doing so will result in a case of extreme stress. A Sunflora is constantly soaking up sunlight and moving around in a blissful fashion. It could be that doing so releases stress, and not getting sunlight and standing still for long periods of time may make Sunflora stressed out.

There are seventeen different Pokémon types, a special attribute determining strengths and weaknesses of each species, offsetting each other in a complicated series of rock-paper-scissors relationships. Sunkern are Grass-types, so their attacks are particularly effective against Ground-, Rock- and Water-type Pokémon, but Bug-types, Fire-types, Poison-, Ice-types and Flying-types attacks are particularly effective against them. Attacks of the Rock, Ground, Water, Electric, and Grass types do little damage to Sunkern, and Sunkern do little damage to other Grass types, as well as to Fire-, Flying-, Bug-, Steel-, Poison-, or Dragon-types. All other types have no particular advantage or disadvantage when facing Sunkern.[3]

Sunkern have abnormally low statistics, the lowest in the game, with a score of thirty for each one. Since Sunkern is slow, defenseless and offensively challenged, evolving is the only way it can effectively battle. Sunkern's evolution will occur only by coming in contact with a Sun Stone.[4] When they evolve into Sunflora, they gain improved stats and can learn many new moves.[5]

Sunkern's attacks are related to the absorption of enemy's power, like Absorb, Mega Drain and Giga Drain which does damage to the opponent and also restores a bit of Sunkern's HP; while Sunflora's attacks are more varied with attacks like Razor Leaf, Petal Dance and Solar Beam.

Sunflora first appeared in Episode 137, A Grin to Win,[6] where Meowth from Team Rocket attempts to disguise itself as a Sunflora to enter a contest. It also appears in "Pikachu's Pikaboo". It tries to blend in with the sunflower patch, but fails at doing so.

Sunflora was also one of the Pokémon that Team Rocket's Meowth transformed into in "It's Love! Pokemon Transformation Convention!". Meowth also dresses up in the same manner in "The Sinnoh Space-Time Legend" where he is part of a major robbery, framing another Sunfora in doing so.

Due to the rocks in Ilex Forest reflecting solar energy like the Sun Stone, Gold's Sunkern evolves into Sunflora. 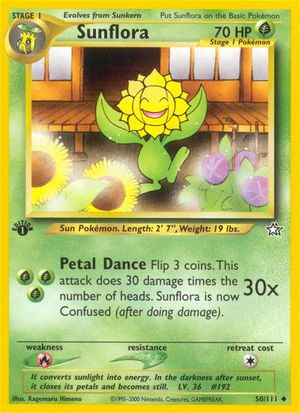 Sunflora is one of the more neglected Pokémon in the Pokémon Trading Card Game. Sunflora has only appeared in the following sets: