Sunkern (ヒマナッツ, Himanattsu, Himanuts in original Japanese language versions) is a fictional species of Pokémon from the Pokémon Franchise – a series of video games, anime, manga, books, trading cards and other media created by Satoshi Tajiri.

Sunkern are small, yellow-and-brown creatures with green leaves protruding from their heads. The name Sunkern refers to the species as a whole, as well as to individual specimens. In origin, the name is possibly a portmanteau of the words sun and kernel. Its Japanese name in a portmanteau of hima, "sunflower", and "nuts".

In the Pokémon universe, a Sunkern's entire life would be centered around its evolution into a Sunflora. Sunkern would move as little as possible, trying to preserve the energy and nutrients it would require for the evolution process. Sunkern's dietary are summarised, in the Pokédex, to be only morning dew, which collects under the leaves of plants beneath which it would lie. The natural enemy of a Sunkern would be the fictitious bird, Spearow. Sunkern would be virtually defenseless against predators for their only form of protection is thought to be shaking the leafy heads.[1]

There are seventeen different Pokémon types, a special attribute determining strengths and weaknesses of each species, offsetting each other in a complicated series of rock-paper-scissors relationships. Sunkern are Grass-types, so their attacks are particularly effective against Ground-, Rock- and Water-type Pokémon, but Bug-types, Fire-types, Poison-, Ice-types and Flying-types attacks are particularly effective against them. Attacks of the Rock, Ground, Water, Electric, and Grass types do little damage to Sunkern, and Sunkern do little damage to other Grass types, as well as to Fire-, Flying-, Bug-, Steel-, Poison-, or Dragon-types. All other types have no particular advantage or disadvantage when facing Sunkern.[4]

Sunkern have abnormally low statistics, the lowest in the game, with a score of thirty for each one. Since Sunkern is slow, defenseless and offensively challenged, evolving is the only way it can effectively battle. Sunkern's evolution will occur only by coming in contact with a Sun Stone.[5] When they evolve into Sunflora, they gain improved stats and can learn many new moves.[6]

Sunkern's attacks are related to the absorption of enemy's power, like Absorb, Mega Drain and Giga Drain which does damage to the opponent and also restores a bit of Sunkern's HP; while Sunflora's attacks are more varied with attacks like Razor Leaf, Petal Dance and Solar Beam.

A Sunkern featured in Episode 189, "Moving Picture", in which the group, including Todd, visit a fertile mountain, which has been frozen because of an Articuno, the Pokémon Todd is attempting to photograph. The mountain, usually inhabited by Sunflora, was turned into a barren icy slope. The group came across an abandoned Sunkern, and left it with a visiting old couple in the area. In return for aiding it, Ash gave the Sun Stone he had won at the Bug Catching Contest to the couple so Sunkern could evolve. This evolution allowed the couple to take their picture with a Sunflora, as they did the day they married.[7]

Gold, a male protagonist of Pokémon Adventures has a Sunkern, named Sunflo, that he caught in Chapter 99, "VS. Sunkern", during a battle with police officer, Falkner, against a Skarmory. Gold discovers that Skarmory are weak to Fire-type attacks, but his Cyndaquil can't reach the Flying Pokémon, so Gold catches a drifting Sunkern to propel Cyndaquil into the air.[8] Sunflo evolved in Chapter 172, "The Last Battle! IV", in which, Gold's team of Pokémon attempt to battle the crime lord, the Mask of Ice. As the Pokémon battle him, the Mask of Ice laughs that whatever the damage, he can regenerate his body. Gold's Sudowoodo uses his Aipom's Baton Pass to speed around and restrain the antagonist, while Gold's Mantine launched Sunflo into the air, where it used a Sunny Day attack, and evolved into a Sunflora. Gold's Typhlosion charged forward and destroyed the Mask of Ice's lower body with a Flamethrower.[9] 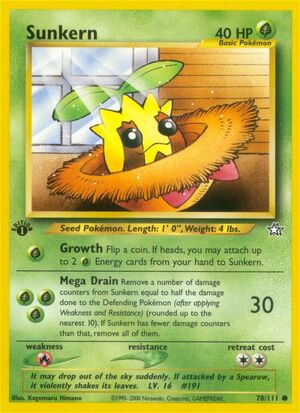 Most Sunkern cards are typical, Basic Pokémon cards, and are primarily used to play stronger cards (such as Stage-1 Pokémon, like Raichu, or Stage-2 Pokémon, like Charizard).[10] Sunkern have appeared in the Neo Genesis, Neo Destiny, Skyridge and EX: Unseen Forces sets.[11]