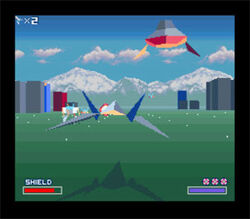 The Super FX is probably the most widely recognized coprocessor chip used in select Super Nintendo (SNES) video game cartridges. This custom-made RISC processor was typically programmed to act like a graphics accelerator chip that would draw polygons to a frame buffer in the RAM that sat adjacent to it. For those games, the data in this frame buffer was periodically transferred to the main video memory inside of the console using DMA in order to show up on the television display.

The Super FX chip was designed by Argonaut Games, who also co-developed (with Nintendo) the 3D space scrolling shooter video game Star Fox to demonstrate the additional polygon rendering capabilities the chip brought to the SNES. Compared with the graphics of modern 3D games, the graphics appear very simple. Although Star Fox was capable of rendering polygons, the number of polygons was in the hundreds as opposed to the millions of today's games. Star Fox used scaling bitmaps for lasers, asteroids, and other obstacles, but other objects such as ships were rendered with polygons. With the release of Star Fox in 1993, the Super FX became the best selling RISC-based processor at that time.

In addition to rendering polygons, the chip was also used to assist the SNES in rendering advanced 2D effects. Super Mario World 2: Yoshi's Island used it for advanced graphics effects like sprite scaling and stretching, huge sprites that allowed for boss characters to take up the whole screen, and multiple foreground and background parallax layers to give a greater illusion of depth.

The first version of the chip, commonly called the Super FX (no number), is clocked with a 21 MHz signal, but an internal clock speed divider halved it to 10.5 MHz. Later on, the design was revised to become the Super FX GSU-2; this, unlike the first Super FX chip revision, was able to reach 21 MHz.

All versions of the Super FX chip are functionally compatible in terms of their instruction set. The differences arise in how they are packaged, their pinout, and their internal clock speed. As a result of changing the package when creating the GSU-2, more external pins were available and assigned for addressing -- as a result a larger amount of external ROM or RAM can be accessed.

Game cartridges that contain a Super FX chip have additional contacts at the bottom of the cartridge that connect to the extra slots in the cartridge port that were not normally used. Cartridge adapters such as cheat devices made before the release of Super FX games, such as the Game Genie, did not have a connection to these previously unused slots. This meant that Super FX games could not be plugged into these devices.

Because of higher manufacturing costs, games that included additional hardware such as the Super FX chips retailed at a higher MSRP than most SNES games.