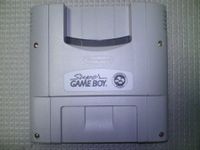 The Super Game Boy had a couple of unique features going for it. For one, the user could select the color palette from a limited number of choices. Another cool option allowed players to select a border for their game that would appear around the game boy sized screen. Certain games even had specifically designed borders, and one of the first games to have this was Donkey Kong (1994).

About a year later, Nintendo released the Super Game Boy 2 in Japan which was the same, except it included a new feature, the Link Port.