Super Mario 128 was the name most gamers and game journalists used to refer to the "true" sequel to Super Mario 64. The name was coined by Miyamoto in an interview with Nintendo Power in 1997. Just what SM64's "true" sequel is, is open to fan interpretation, which is why the name stuck around even after the debut of Mario's second 3D outing, Super Mario Sunshine. 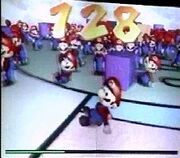 The moniker would have, perhaps, slipped from the minds of most gamers had a demo for the GameCube called 128 Marios never been made. The demo, which debuted at Nintendo's SpaceWorld 2000, featuring 128 Marios walking around a planet and picking up blocks was created to show off the power of the GameCube. Rumors say that Super Mario Galaxy is what this demo has turned into.