Super Mario 64 was one of the two launch titles for the Nintendo 64. Released on September 29, 1996, Super Mario 64 was the first 3D Mario game, in which the player had the ability to move Mario in all directions, compared to his 2-D counterpart which only let the player move him in a linear path.

An altered port which came with minigames, some graphical upgrades, and even more stars came out in 2004 for the Nintendo DS under the title Super Mario 64 DS. 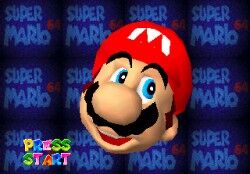 Players can play around with Mario's face on the title screen.

Mario has received an invitation from Princess Toadstool, asking him to meet her at the castle because she baked a cake. After a brief introduction of the castle and the surrounding area, Mario makes his appearance, bursting out of a Warp Pipe. One of the Lakitus that gave the introduction to the castle greets Mario, explaining that him and his brother are cameramen, and will be recording his adventure on video, which the player is given a tutorial on how to change the camera angle.

Once inside the castle, Mario is greeted with a message accompanied by ominous music and an evil laugh telling him to "go away, no one is home". If Mario talks to the Toad in the foyer, he will tell him that Bowser kidnapped the princess and is holding her inside one of the paintings on the walls and is using the magic of the Power Star to seal the doors behind him. 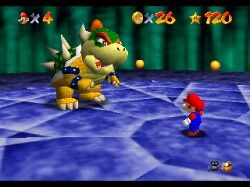 Mario while fighting Bowser in the Dark World.

Mario has a variety of abilities at his disposal. He can kick and stomp now, but he can also perform. One must master all the moves to be able to enter specific areas. Mario can also fly, turn his body into metal and become invisible by unlocking special switches.

The game is divided into fifteen major levels and a few minor (secret) levels. The main goal of a mission is to find a Power Star. Once the player has enough stars, another door to a level is unlocked. There are 120 stars to collect for a 100% rating, although it's not necessary to complete the game.

Super Mario 64 is divided into 15 major courses. Each course has 6 "episodes", a power star in each one. If Mario collects 100 coins in a course, he will receive another star.

One of the reasons Mario 64 is considered a major moment in Video Game history is because of how it effected the rest of the industry. Most 3D platformers from that point on took inspiration from Mario 64 as opposed to Crash Bandicoot. It did what most 3D games had problems with, and some still struggle with today, by having a camera that wasn't completely unwieldy. By using the C-buttons to adjust the camera in a direction, or the Z-stick to snap behind Mario for a playable view, players were able to adjust their range of sight to fit any situation.

Additionally, the whole idea of "item collection" or fetch quests started in this game, even though it's not significantly guilty of having this. While in the days of 2D side scrollers, where the objective is to just make it to the end of the level, 3D games provided a problem by having...well, three dimensions. Instead of the end of a level, Mario is given objectives that signify an "end", marked by the stars. Most 3D platformers after this followed this item collection format afterwards.

Lets Mario soar through the air whilst the effect lasts. Flight is activated either by triple jumping or shooting out of a cannon.

Turns Mario invisible, making him immune to some attacks and allowing him to pass through some surfaces, such as iron meshes.

Makes Mario invincible and allows him to walk underwater and through poison gas.

Allows Mario to ride on top of a Koopa's shell, knocking out enemies and allowing safe travel over various hazards (such as lava and quicksand).