From Codex Gamicus
(Redirected from Super Mario Brothers)
Jump to: navigation, search
This article is about the game. For the series, see Mario (franchise).

Super Mario Bros. was an influential and groundbreaking game created by Nintendo and released on the NES. Considered a classic of the medium and making a huge impact in entertainment at the time, Super Mario Bros. featured bright, expansive worlds that changed the way video games were created. Although often wrongly credited as the first scrolling platform game (there are at least a half dozen earlier), it is the first console original in this genre to feature smooth-scrolling levels, which made it a landmark in home video-gaming.

Super Mario Bros. is listed in The Guinness Book of World Records as the best-selling video game of all time, and was largely responsible for the initial success of the Nintendo Entertainment System, as well as ending the two year slump of video game sales in the United States after the video game crash of 1983. It has inspired countless imitators and was one of Shigeru Miyamoto's most influential early successes. The game starred the Italian plumber Mario and his slightly younger brother Luigi, the former eventually becoming Nintendo's most well known mascot. The theme music, by Koji Kondo, is recognized world wide, even by those who have not played the game.

The game usually lasts about 3 hours for complete gameplay, without the use of Warp Zones, but it is easily completable in around 10 minutes with the warps.

The ending was probably the most memorable, since it is the main ending and storyline used for most of the Mario games after this one:

The game was succeeded by a direct sequel in Japan (later retitled Super Mario Bros.: The Lost Levels in North America), and by Super Mario Bros. 2, a Mario-themed port of Yume Koujou Doki Doki Panic, elsewhere in the world. 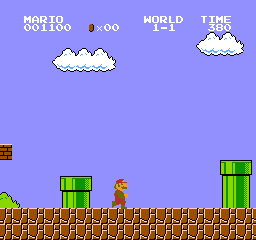 The player takes the role of Mario, or in the case of a second player, Mario's brother Luigi. The object is to race through the Mushroom Kingdom, evade or eliminate Bowser's forces, and save Princess Peach (also called Princess Toadstool). The Mario Brothers' primary attack is simply jumping on top of ("Stomping") their enemies, which kills the mushroom traitors (which in Japan are actually chestnuts and not mushrooms), known as Goombas, and sends the turtle soldiers known as Koopa Troopas into their shells. Mario and Luigi can then kick these shells into other enemies, which will conveniently dispatch them; but conversely, kicked shells can bounce back off walls or other vertical obstructions and hit them. Some enemies can be killed only by fireballs or shell impact; stomping them will hurt the Mario Bros. Jumping on enough enemies in succession or kicking a shell into enough enemies in succession (combos) results in double points earned with each enemy killed, eventually earning Mario or Luigi a 1-up - an extra life - another chance to pass the level. Mario and Luigi can also obtain 1-ups through finding 1-up mushrooms and by collecting 100 coins.

Mario or Luigi can be hurt if the either touches an enemy. Aiding them in their quest are several power-ups. One such power-up is the Super Mushroom, which could only be found as mini Mario, caused Mario to grow; the Fire Flower, which could only be found as regular Mario, gave Mario the ability to shoot fireballs. If he takes a hit from an enemy as Super Mario or Fire Mario, he simply reverts to regular Mario and the game continues. However, if he takes a hit as regular Mario, falls down a pit (regardless of status), or if the time clock runs out, he loses a life and starts again. The point where Mario continues depends on how far he ran through the level before dying: either from the very beginning or at an invisible "checkpoint" partway through the level. There are no checkpoints in castles or in world 8, the final world. Mario can also collect a Starman and become invincible. Invincible Mario is impervious to the touch of enemy characters and most obstacles, although he will still die if he falls in a pit, falls into lava, or if time runs out.

The game consists of eight worlds with four levels in each world. Though each world is different, there are basic similarities: typically the first sub-world is a generic above-ground (overworld) level, the second is in an underground dungeon on Worlds 1 and 4 or underwater on Worlds 2 and 7 (or in the overworld with a unique challenge), the third is almost always a series of platforms suspended high in the sky, and the fourth is always a fortress or castle. The third and sixth worlds take place at night, and all other worlds take place during the day. At the end of each castle level, Mario fights "King Koopa" (who, until the final level, is actually a lesser enemy disguised as King Koopa) across a bridge over a pool of lava. In the later worlds (worlds 6 to 8), King Koopa throws hammers as well as occasional jets of fire breath. King Koopa may be defeated in one of two ways: either by touching the axe at the edge of the bridge (thereby dropping King Koopa into the lava) or, as Fiery Mario, throwing fireballs at him to defeat him directly, revealing what enemy is in disguise; this is the only method one can use to receive points for Koopa's defeat. At the end of each world save the last, Mario is greeted with the words, "Thank you Mario! But our princess is in another castle!", spoken by a Mushroom Retainer, which became a popular quotation among gamers.

After beating the game, the player is given the option to start the game again in "'Hard' Mode", where all Goombas are replaced by Buzzy Beetles (Koopa Troopa-like enemies who cannot be killed by fireballs), and all enemies walk faster. In addition, the elevator-style lifts are about 60% their original size throughout. There are also some hazards in the earlier worlds that only appear in "Hard Mode". For example, in World 1-3 random Bullet Bills fly across the screen, a danger that normally only appears in certain later levels.

Players may get to the beginning of any world with a relatively small amount of effort by using hidden warp zones in a number of levels. One is in level 1-2 and is reached by walking on the blocks at the top of the level passing the exit pipe. This zone allows jumping to worlds 2, 3 and 4. The other two are in 4-2; one is reached in the same manner as the one in 1-2 but this only allows access to world 5. The other is reached through a beanstalk that grows from a hidden block and takes the player into a surface area that leads to worlds 6, 7, and 8.

In November 1986, the Milwaukee Journal described the original NES version of Super Mario Bros. as "the best video game this year".[1]

In the March 1986 issue of Computer and Video Games, Clare Edgeley gave the arcade version a positive review.[2]