Super Smash Bros. Melee is the sequel to the Nintendo 64's Super Smash Bros. Players can fight with 25 of Nintendo's mascots on over 20 stages. This game is known for its ease for new players to pick up and play, yet holds enough depth to keep veteran fighter fans occupied. Unlike other fighting games, SSBM places emphasis on platforming in combat, and does away with complicated button combos and the life bar. The game features many unlockables, such as characters, stages, and trophies that give trivia and background info on a wide range of Nintendo Products.

A sequel was released in 2008 to the Wii, called Super Smash Bros. Brawl. 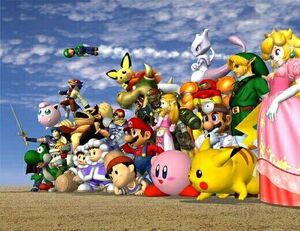 The games fighting engine is a much more refined version of the first game, Super Smash Bros. for the N64. For those that don't know what it's like, it's completely different from a traditional fighting game. There are no long button combos, but instead simple button + direction attacks. There is much less focus on combos and much more on platforming. Items can be thrown in for added mayhem, giving characters weapons or health or invincibility or something that will just blow everything up. Instead of a lifebar, you are given a "damage percentage counter", which gets higher the more you are hurt. The higher your damage, the farther you fly when you're hit hard, until eventually, you just fall too far off the stage that you can't jump/fly back.

The controls are almost identical, except with the addition of a new special attack, B and Forward. Some attacks have been moved to different combinations (such as Link's boomerang) to make room for new moves (Link's Bow & Arrow). Additionally, Smash Attacks can now be charged up, and also used with the C-Stick (Vs. mode only).

Several tweaks were made to existing characters, to the dismay of some fans. The biggest tweaks are with Kirby & Ness who were drastically weakened or nerfed. Some feel this is a good thing, since they were arguably too strong in the previous game, while others feel like their favorite character has been made useless. 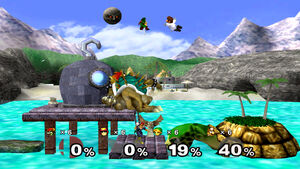 To add another level of obscene replay value, the game also lets you collect trophies of various Nintendo Franchises, some of which are not even known in the United States. There are exactly 293 trophies representing characters, items & stages; from the well known Goomba of Super Mario Bros. and Octorok of The Legend of Zelda to the unknown Ray Mk II from Japan's Custom Robo V2 and Tom Nook from Animal Crossing (labeled as "FUTURE RELEASE"). Trophies are won in several ways: Completing requirements (Play a certain number of games/hours/ranks), putting coins earned into a gumball machine, beating All-Star mode or collecting them in Adventure mode.

There are three multi-match single-player modes. Classic is just like the single-player of the original Super Smash Bros., except opponents are randomized. Adventure takes players in a preset path through the world of Nintendo, combining matches with platforming (such as the escape from Brinstar). All-Star has the player face off against all characters with a single life and only three 0% Hearts (damage is carried over between matches).

Super Smash Bros. Melee, despite being a simple fighter, can actually have depth and advanced moves that are hard to pull off, like wavedashing. Some of these moves probably weren't intended to be used by the developers, since they are the result of taking advantage of the games physics and mashing together different moves.