Nintendo's Super Smash Bros., released in 1999, was a fighter game for the Nintendo 64. It was groundbreaking due to its pick up and play gameplay and the fact that it had combined several Nintendo all-stars into one fighting game, a relatively new idea. 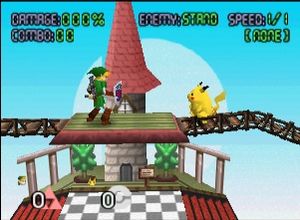 The gameplay is very different from most 3D fighters at the time such as Tekken or Soul Calibur. Instead of complicated combinations of buttons to execute moves, players are given simple, straight forward single button commands that change when paired with a direction. The A button is used for normal attacks like punches & kicks (Each character has different kinds of normal attacks) while the B button is reserved for the popular special attacks. These attacks make the character use a familiar looking move, usually signature moves from their games. Mario's fireball, Link's spin slash and Kirby's power-stealing inhale to name a few.

A wildcard thrown into the gameplay are the optional items. There are many of them and they are all wacky. Sure, you've got normal items that will heal you, but then there are paper fans, Bob-ombs, Poké Balls, Hammers from the Donkey Kong arcade game and more. These items can lead to extreme damage for anyone on the field.

To make things even more unorthodox, there is no traditional life meter like in every other fighting game. Instead, you are given damage percentages. Characters start with 0% in each game, but as they get beat up, the percent rises. The higher the percent, the easier they are to knock away, and off the platform. That's how you beat enemies. You knock them either all the way past the bottom, all the way past the top, or far off to the left or right. This mechanic makes floating characters like Jigglypuff or Kirby especially useful for recovering back to the stage. Damage percent can go as high as 999%, where nearly anything can send you flying.