Super Smash Bros. Brawl, known in Japan as Dairantō Smash Brothers X (大乱闘 スマッシュ ブラザーズ X, Dairantō Sumasshu Burazāzu Ekkusu, roughly "Great Fray Smash Brothers X"), is the third game in the Super Smash Bros. series, and is currently available for Nintendo's Wii console. It was first announced at E3 2005, but no solid information or images were revealed until E3 2006. Once again being helmed by Masahiro Sakurai, the game is notable for being the first to incorporate a non-Nintendo character, Konami's famous Solid Snake. Sonic the Hedgehog was also confirmed as a playable character.

Also notable is that the main theme was composed by Nobuo Uematsu, best known for his iconic work on the Final Fantasy series. Super Smash Bros. Brawl will be compatible with GameCube controller, the Wii remote, the Wii remote and nunchuk, and the Wii Virtual Console controller.

Super Smash Bros. Brawl is compatible with four different types of controllers: the Wii remote, Wii remote and nunchuk, the GameCube Controller, and the Classic controller. The player is able to name the character he chooses. New combat features that have been added include Tether Recovery and Final Smash. The player can use Tether Recovery to recover from falls during combat. Final Smash is a strong skill that can be performed multiple times (per match) after obtaining the Smash Ball. The player can also play adventure mode titled "The Subspace Emissary" which is a side scrolling action game that features a storyline. Special Brawl is a game mode in which the player can apply special rules such as "equip every character with flowers or bunny ears". Players can also choose classic single player mode in which his objective is to clear the stage. Target Smash is another mode of play in which players smash target signs.

The trailer reveals a number of things about the game, such as new items like a Nintendog that obscures the whole screen, and an item that allows a super attack. These super attacks range from a giant, screen-spanning fireball from Mario and to multiple Triforce slashes from Link.

On June 5, 2007 Groudon was announced to be one of the Pokémon that can be summoned from the Pokéballs and the basic controls to the game were shown off. On Monday, June 4, the Yoshi's Story ending theme was added to the soundtrack. On June 14, the new features of the crates and barrels were shown. The features include the different art for the crates on each level and their abilities to roll off slanted surfaces. On June 25 Nintendo announced that Princess Zelda would be returning to Super Smash Bros. Brawl. The banana peel was shown on June 27.

On July 2, 2007 The Assist Trophies debuted. On July 3 it was announced that Bowser was returning to Super Smash Bros. Brawl.

On August 13 the Pokémon Trainer debuted for SSBB, and on August 15, Stickers were added to the game. Stickers are similar to trophies from Super Smash Bros., but you can arrange them and create various images. Tether Recovery was introduced on August 16. It allows a certain characters to latch on to a cliff when they fall off. On August 17 Princess Peach was officially confirmed.

On October 3, Excitebike assist trophy debuted and on October 4 shielding and dodging techniques were explained. On October 6, team play was announced for the adventure mode. At Nintendo's fall conference a video of the gameplay was shown. On October 10 Sonic the Hedgehog made his debut. Sonic is the second third-party character to be in the Brawl. On October 11 Nintendo announced that the SSBB would not be release on December 3, 2007 and the release date is delayed to February 10, 2008. On October 13 the box art, which was leaked October 6 on amazon.com, was confirmed to be the real box art for SSBB.

On October 23 a video was released which features Donkey Kong and Diddy Kong against the a hammer brother stealing bananas. On October 24 Target Smash gameplay was shown off and on October 25, King Dedede made his debut. On October 29 the stage builder for SSBB was shown off. On the 30th the Classic gameplay mode was featured on the Super Smash Bros. site. On game screen appearances have been added on November 2, 2007.

On January 7, 2008 Nintendo showed off the returning stages from Super Smash Bros. Melee and on January 8 they described the Multi-Man Brawl game mode. On January 9 Pikmin and Captain Olimar appeared as new challengers. On January 15 it was announced that the game will be delayed from February 10 to March 9. 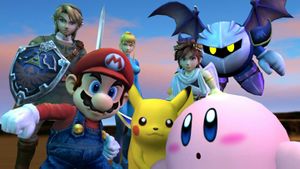 Assist Trophies are a new feature in Super Smash Bros. Brawl. When held up, the Assist Trophy summons a guest character that assists the player. The majority of Assist Trophy characters are invincible.

Super Smash Bros. Brawl, like its predecessors, contains a variety of stages hailing from various video game series. However, it should be notable that Super Smash Bros. Brawl is the first in its series to contain stages that do not have a fighter to represent them, such as the Animal Crossing stage, among others. There is also an option to create levels.