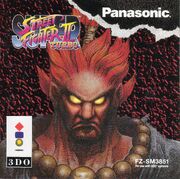 Super Street Fighter 2: Turbo on the 3DO

It was released in response to the claim that Super Street Fighter II played too slowly.

The game introduced the "super combo", a powerful move that can only be activated once a gauge is full. The super art became a permanent fixture in the Street Fighter Alpha series. The game also introduce the first hidden character in the series, Akuma. Should the player succeed in defeating all preliminary opponents, as well as Balrog, Vega and Sagat without using any continues (or to a greater extent, without losing rounds), he will reveal himself. Once the player reaches M. Bison, at the start of the round Akuma will warp in, and dispose of Bison using the Shun Goku Satsu. There is no name on Akuma's lifebar, the portrait is completely black and different music is playing.

This method has its strengths and weaknesses. Old characters cannot do the Super Combo moves and they cannot flip out of a throw. On the other hand, some features are considered welcome, such as at the start of a Dragon Punch, Old Ken and Old Ryu are completely invincible and cannot be hit out of it (Turbo Ken and Turbo Ryu can be hit out of it at any point).