Supreme Commander is a real-time strategy (RTS) computer game, developed by Chris Taylor's Gas Powered Games and currently slated for release in the first half of 2007. It was first announced in the August 2005 edition of PC Gamer magazine and is referred to as the spiritual successor to Taylor's 1997 RTS game Total Annihilation, which has been widely hailed as one of the great triumphs of the genre. 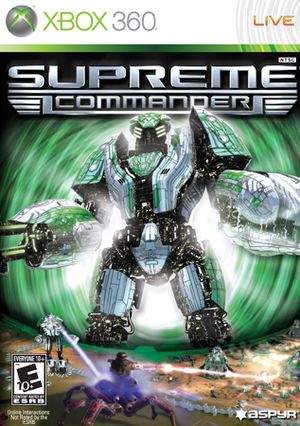 According to the PC Gamer article, Supreme Commander will be unique amongst the countless members of the RTS genre in that it integrates grand-strategy ("Risk-like") mode with real-time, individual, ground-level tactical battles. This may sound similar to systems found in games such as Rise of Nations or Total War, but in Supreme Commander this integration will allegedly be seamless. It will be a matter of zooming in or out on the map to go from the bird's eye view of the entire theater of war, where icons represent armies, down to observing skirmishes amongst individual units.

In the article, Taylor claims that "almost all modern RTS games do not actually employ strategy. In reality, they simply pit opponents against each other in resource wars, where the combatant with the most units wins". Not wanting to go into detail with the game not yet released, Taylor said that his goal is to appeal to an untapped audience who would appreciate the presence of actual strategy in his game. This will be accomplished by using the aforementioned scale of the game; finding a happy medium between serious war-gaming and ground-level carnage.

In the Quantum Age of 2018, scientists from Earth began experimenting with "quantum tunneling", which allows transport of living matter through great distances. However, tunneling is prohibitively expensive since one tunnel requires the energy output of up to 25 fission reactors. The focus on conventional space travel has run into problems since the travel just isn't fast enough. In due time, scientists finally perfect the technology with the teleportation of a single atom of caesium in a lab, and the first off-world teleportation moved a milligram of iron onto Mars. They then slowly started working up the food chain from insects to mammals like mice and monkeys. The first humans are "tunneled" in 2062 when a group is sent to Neptune's moon Triton to further explore interstellar travel. The quantum tunnel transport takes .26 seconds.

The galaxy slowly begins to be colonized through a variety of tunnel networks, radiating from Earth like the spokes of a wheel. By 2284, 16 colonies have been created now known as the Prime Worlds and by 2316 each of these begin their own expansion. 210 years later, 110 colonies begin their expansion as well. Alien life at this point was yet to be discovered.

By 2663, there are now more than 400 self-replicating colonies and the empire is having trouble regulating them. Small scale wars develop between colonies and the Earth sends Colonial Command forces to stamp out the resistance. These pacification operations continue to grow. What the Earth doesn't realize is that some of these rebellions are being started by Colonial Command Commanders unhappy with current events and/or greed for power of their own. The Earth Empire is slowly losing its iron grip on its colonies.

Despite all the turmoil, expansion continues, with Earth claiming control of as many as 1,280 systems at its peak. The Colonial Command is stretched to its limits because of unrest along the frontier. Historians mark 2819 as the beginning of the Infinite War. The last loyal remnants of the Colonial Command have retreated back to the 16 Prime Worlds, abandoning the rest of the galaxy to anarchy. Much of the Quantum Gate network is destroyed by various factions pushing their own agendas. Many worlds that relied on the Empire are lost, as are the technology and science that may have been in development. It is during this time that 29th-century combat takes on a new face. A single man in a self-sufficient commander suit can arrive alone on a distant world and create a massive army of robots, tanks, ships and planes within hours of arrival, using only the native mass and energy of the planet. Whole worlds are laid to waste in battles between these commanders and robotic armies. It is believed the Infinite War is lasting as long as it is because of the inexhaustible nature of these "Supreme Commanders" and the fact that they were never envisioned on such a massive scale.

The Earth Empire finally crumbles and a new government comes in vowing to reach out to the worlds abandoned as the empire collapsed. This United Earth Federation offers stability to troubled worlds. Meanwhile, the Aeon Illuminate suggests that worlds accept "The Way" or destruction. And the Cybran Nation fights trying to free their brothers from the oppressive human way. Now the battle lines are drawn and the sides clearly defined. There is no room for compromise, no room for mercy. No room for anything but the complete eradication of anyone who oppose their conflicting and unwavering beliefs. Finally, it has reached a turning point. You are the Supreme Commander and only you have the power to bring the Infinite War to an end once and for all.

The fate of the galaxy is in your hands.

In Supreme Commander, three sides, which are all at least nominally human, are engaged in an "Infinite War" (i.e. a total war) of liberation and much sought-after peace.

The United Earth Federation is the generic human side and seeks to re-unite humanity and restore the old Earth Empire from which they developed after a protracted period of dissolution. They favor large caliber guns, rolling tanks and armoured vehicles with wheels and treads.

The UEF possesses in its experimental unit arsenal the 'Mavor' Strategic Artillery piece(Which can fire powerful shells to anywhere on the map with excellent accuracy), the 'Fatboy' Mobile factory, and the 'Atlantis' submarine aircraft carrier. The UEF is also the only faction capable of equipping the Armored Command Unit (the Supreme Commander) with nuclear weaponry.

The Aeon Illuminate is a quasi-religious order of humans who have adopted the advanced philosophy and technology of a highly intelligent extinct xtraterrestrial species. Having learned from the peaceful, pacifistic aliens part of the secret of their communal shared awareness, they are convinced that the collapse of the Earth Empire was due to the logistical failures which become common to human organisations on massive scales, and that the only way to guarantee human prosperity and peace into the future is though the philosophical and scientific world view they have inherited. They are therefore on an obsessive mission of peace, which is to be achieved through the conversion or coercive assimilation of the rest of humanity into their ways. Their name reflects their ideology, the word 'Aeon' meaning either "age" or "eternity", and 'Illuminate' meaning "to enlighten".

The Aeon have the 'Tempest' submersible battleship that can construct naval warships, the 'Czar' flying fortress can carry an entire wing of aircraft, and the 'Galactic Colossus', a several hundred meter tall combat robot with a beam cannon and gravity claws, which pick up and smash enemy units against the Colossus's "hands".

The Cybran Nation is composed of Symbiont], humans whose brains have been computerized and enhanced with implantable technology, including most importantly a downloaded mutual AI (in addition to various other augmentations). This allows them to think more quickly and more precisely, to be more perceptive, to have greater and more accurate memory recall and to be more easily controlled. They fight for the liberation of their fellow Cybran from the oppressive United Earth Federation, which fears their unrestricted potential and treats them as human computers and general technical labourers, due to the seamless ease with which they interface with technology. The UEF seeks to maintain the position of inferiority and service of the Cybran to natural humans, whereas the Cybran Nation demands emancipation and a society of their own in which they would not be forced into a frustrating reliance on humans.

The Cybran own the "Monkeylord", one of the few experimental units shown to the public — a massive six-legged spider-like machine armed with a potent heat laser. The Spider bot is also armed with twin light autocannon and a surface-to-air missile battery, as well as torpedoes. It additionally is equipped with stealth systems. To add to it, the legs of the "Monkeylord" also acts as a weapon allowing the unit to crush whatever it stomps over, including structures. The other two Cybran experimental units are the 'Soul Reaper' experimental gunship, a massive beetle-shaped flying behemoth with multiple missile batteries, and the 'Scathis' rapid-fire mobile artillery piece.

At E3 2006, Chris Taylor presented in-game demonstrations of Supreme Commander. One of the features shown was support for dual-head video cards, allowing two separate views of the map on two monitors connected to the PC. Also shown was some advanced unit orders, including dynamic relocation of way points and "time-coordinated assaults".

The graphics engine is fully three dimensional, in contrast to the early screen shots that suggested the terrain might be stored as a flat texture, similar to Total Annihilation.

This same build was used for demos at Comic-Con_International. In addition to dual monitor support, Chris Taylor stated that a wide-screen monitor could be split down the middle to form two virtual screens. He went on to describe that it would be possible to have 4 'screens' at once using two wide-screen monitors; in the beta, this is possible, but impractical.

The biggest feature new to the RTS genre is the degree of zoom. Players can zoom all the way out until the entire map is on their screen. Similarly to Galactic Civilizations 2, units are replaced by symbols as the distance increases. The same commands work at all zoom levels with no distinctions. Various interviews and previews have mentioned that this feature was possible because it was taken into account from the beginning. The entire engine is built around it.

Paths and way points can be edited after creation. During the demonstration, way points were dragged about. When multiple unit types are ordered to attack the same location, there's an option of 'coordinating the attack'. The computer can automatically slow the faster units down so that they will all arrive at the same time.

Chris Taylor wants Supreme Commander to be the most customizable RTS ever made, and would like to ship the team's development tools with the game itself. Again, this may prove impractical during the course of development.

The resource system will be identical to that of Total Annihilation: The game will have two resource types, both generated inexhaustibly by specific buildings and reclaimable in trace amounts from battlefield debris. One resource, energy, can be obtained anywhere, while the other, mass, is primarily obtained at specific locations but can also be synthesized from energy anywhere at great cost. Construction will use these resources as they are generated, creating a dynamic resource system based on balancing the rate at which resources are gathered with the rate at which construction units consume them as they build.

This demo includes an early portion of the single-player campaign for the Cybran Nation, one of the game's three playable factions and a skirmish map named "Finn's Revenge", which can be played on easy, medium, and hard difficulty levels. Download Size :- 1097.1MB