Swinub(ウリムー, Urimū, Urimoo in original Japanese language versions) is a fictional character from the Pokémon franchise. It is a Ground/Ice Pokémon that was introduced in the Pokémon Gold and Silver video games.

Swinub's name is a combination of swine and nub, a small lump.

Swinub bears resemblance to a pig or a boar piglet. It is found in icy areas.

It roots around with its nose to find food. Its favourite food is a mushroom that grows under the cover of dead grass. Swinub's nose is so tough that even the frozen ground poses no problem. Occasionally, it will find hot springs while rooting around in the ground.

If it smells something enticing, it dashes headlong to find the source of the aroma.

Swinub is catchable in three sets of games: Gold, Silver & Crystal, Pokémon FireRed and LeafGreen, and Diamond and Pearl

In Gold, Silver, and Crystal it is found on the Ice Path, while in FireRed and LeafGreen it is found in the Ice Cave on Four Island. In Diamond and Pearl, Swinub can be found wild as a random daily swarming Pokémon on Route 217. One can also be snagged from Cipher Peon Greck in Pokémon XD.

It evolves into Piloswine at level 33.

In Pokémon Channel, Swinub can be found at Mt. Snowfall under certain weather conditions.

Three Swinub appear in the episode Spring Fever, which are owned by a family that live near the mountain where Ash and Todd spot Articuno. Their names are Su, Ine, and Ub, which is obviously a play on Swinub's name. Also, in the Battle Frontier Saga, Pike Queen Lucy of the Battle Pike had one.

Swinub appears in chapters 144, 178, and 180 of Pokémon Adventures. In all cases, it is owned by Pryce of Mahogany Town. 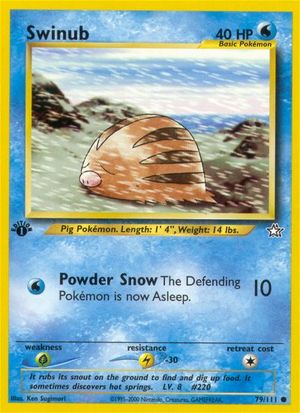 Swinub appears on six trading cards, always as a common card. It is a Water Pokémon in Neo Genesis, Neo Destiny, and Skyridge. However, it is a fighting Pokémon in Neo Revelations, Skyridge (again), and EX Team Rocket Returns.