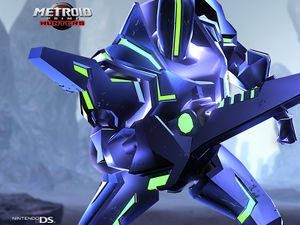 Sylux is shrouded in mystery and fueled by revenge.

Sylux is one of the bounty hunters from Metroid Prime: Hunters. Little is known about Sylux, other than the fact that Sylux harbors and intense hatred for the Galactic Federation, its republic of planets, and, in particular, the bounty hunter who has helped the Federation time and time again -- Samus Aran.

Sylux is cold, and ruthlessly efficient. The definition of an expert Bounty Hunter, Stylux is a resourceful tracker and a deadly sharpshooter. After secretly tracking Samus through the galaxy, Sylux follows Samus to the Tetra Galaxy, hoping for a surprise confrontation. Once there, Sylux becomes tempted by the promise of a super weapon, which Sylux could use to destroy Samus Aran and take on the entire Federation.

Sylux is from the planet Cylosis, but his race is unkown.

Sylux appears again in Metroid Prime 3: Corruption, as part of one of the endings.