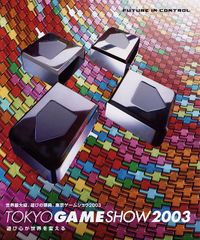 Tokyo Game Show 2003 (TGS 2003) was held from September 26 through the 28th at the Nippon Convention Center in Makuhari Messe. The theme of the show was “A Playful Spirit Can Change the World.” The show was attended by 150,089 visitors, and a total of 111 exhibitors.[1]

Satoru Iwata, president of Nintendo, showed up on the first day of the show to deliver a keynote address titled "20 Years After the Famicom." A wireless adapter for the GBA was announced here which would initially come bundled with Pokémon Leaf Green and Fire Red.[2]