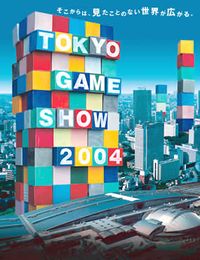 Tokyo Game Show 2004 (TGS 2004) was held from September 24 through the 26 at the Nippon Convention Center (Makuhari Messe, Chiba City). It was held under the theme “A Brand New Sensation for Everyone in the World”. The show was attended by a 160,096 visitors, making the total around 10,000 more than the previous year. There was a total of 117 exhibitors.

A conference for industry insiders was held on the first day of the Tokyo Game Show. Both Greg Coomer, Chief Product Designer of Valve Corporation, and Hiroyuki Kobayashi, Resident Evil 4 (biohazard4) producer of Capcom, gave lectures. Greg Coomer's lecture was given at 4:00 and was titled, "New-generation Game Development Skills and Distribution found in Half-Life2 and Steam." Hiroyuki Kobayashi's lecture was held at 4:30 and was titled, "Resident Evil 4: Challenging a complete remodeling of the Resident Evil series." A panel discussion immediately followed titled, “The future of Interactive storytelling in games.” The panel consisted of both Greg Coomer and Hiroyuki Kobayashi. It was moderated by Akinori Nakamura, IGDA Japan, Associate Professor of Ritsumeikan University.