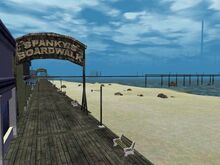 There were giants in those days.

He called himself Talos, though the newspapers preferred the more descriptive, "Terrific Titan". Standing well over 300 feet tall, Talos was the epitome of titanic heroism as he battled to defend Paragon City. Throughout the 50's and 60's, he steadfastly rose to the challenge of combating giant monstrosities. He became the city's newest marvel and champion. Yet deep mystery surrounded his true identity. Even more astonishing was his ability to vanish after battle. A profoundly enigmatic hero, journalists, historians and scholars had only his cryptic utterances for clues to his origin: "For thousands of years, I have been a protector of humanity." The only certainty about Talos was his almost mystical connection to a young boy named Michael McVey. Whenever the youngster was imperiled, Talos would appear to save the day.

In the last climatic battle against his arch foe, the Chimera, Talos and the serpentine beast clashed beneath the waters of the bay. A mighty battle ensued, shaking Paragon City to its foundations, tearing a giant rift in the ocean floor from which earth and lava rose to form an island. Known today as Talos Island, it is said that both Talos and the Chimera are still locked in mortal combat within its stony embrace.

Decades later, Talos' heroism had faded out of memory and into urban legend. Despite countless articles, photographs, and movie clips featuring the heroic exploits of the "Terrific Titan", most citizens have now relegated Talos to the dusty bins of folklore.

During the 1980's, with dollar signs in their eyes, developers seized the financial opportunity of an island so close to Paragon City. Thus began the Talos Island land boom. Within a matter of months, the once barren island was abuzz with construction sites. As a publicity stunt, the real estate moguls even agreed to name the island after the city's mythic giant. An anonymous benefactor donated the huge statue, which now stands several hundred yards from the island.

Today, Talos Island is home to many hi-tech and venture capital firms and is still considered prime real estate. Oddly enough, during the Rikti War, the aliens avoided attacking that area. Consequently, many superstitions have sprung up about the island, including the belief that Talos' statue gives the place good luck. This has only driven the real estate prices higher.

For entertainment, the island features a quaint boardwalk named for Michael 'Spanky' Rabinowitz, an early twentieth century mayor of Paragon City. 'Spanky', as he was known, held the entire city's political machine in a tight fist for nearly thirty years. His backroom dealings controlled and decided the fates of political candidates and businessmen alike for a generation. Despite his administration's sometimes heavy-handed tactics and obvious corruption, Paragon City actually thrived under his leadership. Today, while the memory of Talos has become obscured by myth, 'Spanky' Rabinowitz has been elevated to 'lovable' rogue in the eyes of the public.

Currently, the once peaceful Talos Island is a battleground between two rival gangs. The Warriors, who claim the island as their own private playground, have found themselves embroiled in a bloody turf war with a recently arrived gang known as the Tsoo. What's at stake is more than real estate, as the Warriors have been the controlling force behind the Import of a large number of minor mystical relics and the Tsoo, a gang with arcane leanings, would very much like a major piece of the action. Out of this dangerously escalating conflict comes a major threat to not only Talos Island but Paragon City as a whole. Heroes are needed desperately to stem this rising tide of blood and destruction. Talos is watching. Can you measure up?